On 24 October, John Mark O'Leary, Lecturer/Assistant Professor in Equine Surgery, presented to the Clinical Club, with the session chaired by Sourav Bhattacharjee from the Veterinary Biosciences section.  John Mark began his talk by outlining that it really does come down to ‘No Leg, No Horse’ in the case of a young thoroughbred, especially a colt; if the horse is not orthopaedically sound, their long-term survival is diminished.

John Mark's talk focused on the case of 4 month old colt foal who was referred into the UCDVH with a swelling on one eye, which was the result of a fracture.  The team carried out CT imaging of the skull, which offers much better detail than x-rays and also assists with pre-surgical planning.  The team opted for plate fixation to repair the fracture.  John Mark outlined that there are a number of internal fixation options available, all of which were examined carefully as it's very important to go for the right option.  When the most suitable option was identified, a skull in the lab was used to pre-contour the plate prior to surgery.  The horse was also given broad spectrum anti-biotics in preparation for the surgery.  The operation went well, with the plate to be removed 4 to 6 weeks later, and an ophthalmology exam scheduled for a month after surgery. 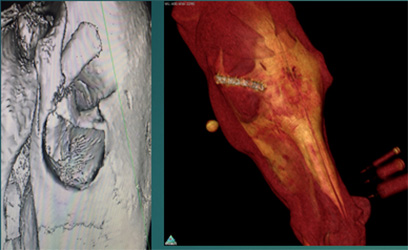 During the recovery period, however, the foal reared up, flipped over backwards and fell to its left side; this incident left it acutely, severely lame with a dropped elbow appearance.  The foal was now in need of surgery again, and a DCP plate was chosen to repair the elbow fracture sustained in this incident as it’s easier to mould.  The operation was a success and the foal walked back comfortably to its box post-op.  In terms of the original problem with the eye, John Mark outlined that there was slow progression of upper eyelid function returning, and this was being monitored.

In terms of the second injury, the UCDVH team had to look at whether or not the plate should be removed.  This is generally not advised, except in cases of severe infection.  This animal, however, had to race as a career, so this needed to be done to allow for this.  The team sought advice from a number of colleagues, and then presented the information to the owners who opted to have the plate taken out.  The colt was then put on a 2-week aggressive walking programme prior to plate removal, which was necessary to stimulate callus formation.  It was decided that the eye implant would be removed at the same time as the elbow plate removal.  During the two week programme however, the animal went lame on its right leg.  Investigations showed that it had severe juvenile degenerative joint disease; in this case, the prognosis for pasture soundness was fair, but the prognosis for racing soundness was poor and this foal had been bred to race.  Ultimately, the eyelid function came back really well, but 'no leg, no horse' meant that the foal was euthanized. 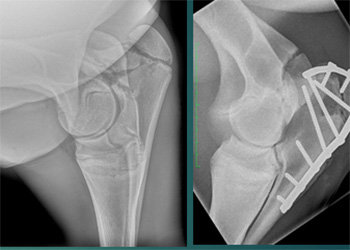 Sourav thanked John Mark for presenting such an interesting case and highlighted that this was the sort of real-life case vets could encounter that you don’t read about in textbooks.  Questions were asked around the costs involved in such a case and John Mark outlined that there needs to be trust between the vet and the owners around this; in this case, trust has been built up over a period of time, and another horse had been sent from there to the UCDVH for treatment this week.  Thoroughbred racing is a luxury sport and as an animal could be worth a significant amount of money, the vet's bill is not huge in the overall picture.