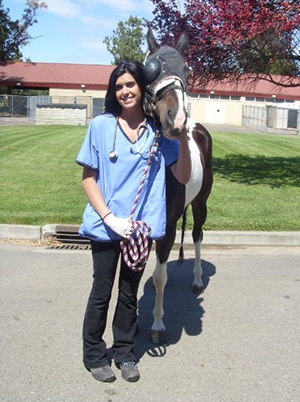 Sunita Jeawon, Resident in Equine Medicine, presented to the Clinical Club on 3 April on 'Septic Peritonitis Secondary to a Perforating Gastric Foreign Body in a Sport Horse Gelding.' Sunita is nearing the end of her Residency, and she has recently published on this case.  Sunita explained that it's a good example of the work of multi-disciplinary teams in the UCD Veterinary Hospital and really shows the range of specialists in the UCDVH.

Sunita went through the case history involving a 17 year old Irish sport horse gelding, who had shown mild colic signs over 36 hours; this had been treated, but the treatment had failed to totally relieve the symptoms and he was referred to the UCDVH as an out of hours emergency case.  On arrival, he was quiet but alert and responsive, with no overt signs of colic and nothing to be too concerned about at that point; Sunita highlighted the importance of a thorough clinical exam.  The Team then worked through a series of diagnostic tests, looked at the de-worming history and there were no issues there.  Ultrasonography was largely unremarkable.  They then took an abdominocentesis which produced a thick, yellow/cream-coloured fluid which was submitted for culture, sensitivity and cytology.  In the meantime, the horse was stabilized overnight with supportive IVFT and anti-microbial, anti-inflammatory and anti-ulcer treatments were started.

When the abdominocentesis results came back from the UCDVH Diagnostic Laboratories, they showed extreme neutrophilic exudate and a marked, septic peritonitis was diagnosed.  Sunita outlined that they then began to look at why this was the case and emphasised that you have to prioritise where you’ll go with diagnostics.  She went through the list of acute and chronic differentials and the evidence for each and looked at what was relevant in this particular case.  She advised that such lists are extensive, and that it's important to sit down as a team and work through them.

A gastroscopy was then carried out and a stick was found in the pyloric region; it wasn't moving anywhere and couldn’t be manipulated.  Horses are typically discerning grazers, and there are no reports in the literature of perforating gastric foreign bodies.

The Team then looked at surgery options – there are few reports of successful gastrotomy being carried out on horses as there is limited surgical access and a high risk of abdominal contamination.  The owners decided to proceed with the surgery, and the team were very much focused on avoiding any contamination risks.  External palpation of the stomach could identify the foreign body within the pyloric region, and it was decided to make a 3cm incision and use a 48cm smooth grasping forceps to attempt retrieval of the briar as a minimally invasive technique; this was unsuccessful.  The incision was then extended to 10cm for manual retrieval of the three-pronged blackthorn briar, which was over 12cm at its longest point with multiple spikes along its length.  The surgeons’ gloves and gowns were changed and the gastrotomy site was copiously lavaged with sterile saline.  A copious abdominal lavage was also performed, two passive 32Fr thoracic drains were placed in the abdomen and a routine 3-layer abdominal incision closure was completed.  The total surgery time was 3 hours and 30 minutes. 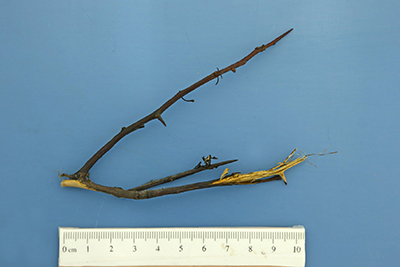 Sunita then went through the clinical progression of the horse in detail.  His vital parameters returned to their pre-op state within 16 hours of surgery, and standing abdominal lavages with warmed CSL were performed on day 2 and 3.  After that, the drains were non-patent and were removed.  On day 5, he spiked a fever overnight.  The following day, a gastroscopy confirmed that there was no remnant of the briar in his stomach and an abdominocentesis showed a non-septic peritonitis.  The incisional site was draining purulent material and was swabbed for culture and sensitivity.  The results showed Strep. Zooepidemicus and an E. Coli and his treatment was changed to oxytetracyline.  By day 11, there was little improvement in the wound healing, and it was swabbed again; this time the results showed a multi-drug resistant E. Coli, which was massively concerning for the Team.  All antibiotics were immediately stopped.  The team then went back to basics in terms of treatment, and began to use topical Dakin’s solution and silver sulphadiazine cream.  By week 9, the MDR E. Coli was gone and only a Staph. and Strep. Spp remained.  A further 10 days of Dakin’s solution and silver sulphadiazine cream were recommenced.  There was considerable improvement in healing over this time, and proud fresh islets appeared which were sharply debrided.   By week 10, he was deemed fit for discharge with box rest and confined paddock grazing recommended.  After 5 months, he was allowed to recommence gentle walking exercise under the saddle and 6 months after the surgery the team were very happy with his progress and overall recovery.  A further 5 months after that, however, the horse suffered a casatrophic colic in the field and unfortunately had to be euthanised.

Sunita concluded her presentation by outlining the key take home messages from this case, emphasising that it was very much a learning opportunity for all involved.  She outlined that a gastroscopy should always be used in these cases, and that a gastrotomy can be successfully performed in horses, although the possibility of post-op complications is very high.  She also highlighted the fact that the reality of multi-drug resistant bacteria cannot be ignored and that a judicious use of antimicrobials is very important; the importance of the symbiotic relationship between veterinary health and human health was also emphasised.  Sunita reminded those in attendance to focus on first principles, and that treatments like Dakin’s solution should be considered.

The full case report in the Equine Veterinary Education journal can be accessed here: https://onlinelibrary.wiley.com/doi/full/10.1111/eve.12865