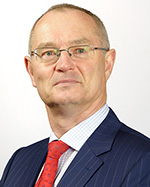 Tony Carey was awarded his B. Comm. (1987) and his MBS (1988) from UCD. On leaving university, he worked as a management consultant with Andersen Consulting (now Accenture) and IBM Business Consulting Services for a total of fifteen years. In these roles he was primarily responsible for business development and the management of relationships with key clients, mainly in the financial services and educational sectors.

In a consulting capacity, he provided assistance to UCD in the development of proposals for the PRTLI processes, including The Conway Institute, The DMMC and The Urban Institute.

Theatre collaborations of note include Striking Back, a new play co-written with playwright Mathew Spangler, based on the experiences of activist Mary Manning during the Dunnes Stores anti-apartheid strikes in the 1980s, CONSTANCE, a new work examining the life and legacy of artist, activist and radical revolutionary Constance de Markievicz, written and directed by Kellie and created in collaboration with composer Michael Rooney, and collaborations with The Emergency Room and Galway International Arts Festival, including Death At Intervals, adapted from José Saramago’s novel of the same name, Samuel Beckett’s prose piece Lessness and Olwen Fouéré’s award winning riverrun, adapted from the voice of the river Liffey/Life in James Joyce’s Finnegans Wake. Kellie was an ensemble performer with Blue Raincoat Theatre Company for seven years and collaborated on the creation of a number of new works with the company, including the Flann O’Brien trilogy. Directing credits for Blue Raincoat include The Yeats Project- The Cat and the Moon and At the Hawk’s Well and remounts of The Bald Soprano and A Brief Taste of Lightning.

Kellie specialises in developing the expressive potential of the body in performance. She wrote and performed two interactive shows for the Science Museum, London- Art, Science and the Moving Body and The Brain and the Body (Televised B.B.C).

Kellie trained at the Ecole de Mime Corporel Dramatique, London and the Centre Artistique International Roy Hart, Maleragues. She holds a first class BA honours in Theatre and History and an MA honours in Physical Theatre. 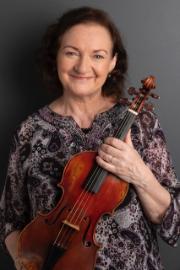 She is a member of the world-renowned period instrument orchestra- The English Concert, and has played with them for almost 20 years. Founded by Trevor Pinnock in the 1970's, the orchestra has a busy touring and recording schedule.

Thérèse has also been a member of the Academy of Ancient Music, The Hanover Band and has played with the Orchestra of the Age of Enlightenment, Raglan Baroque, Deütsche Handel Solisten (Karlsrühe) & the Drottningholm Opera Orchestra (Stockholm). She also leads Marlborough Baroque in Dublin.

In 1996 with Mark Duley, she founded Ireland's first professional period instrument orchestra- Christ Church Baroque- now known as Irish Baroque Orchestra. She was Artistic Director and Leader until 2003. In this role she encouraged many young Irish players to play Baroque instruments and to investigate and explore historical performance practices. Many of these players went on to study in London, Manchester, and The Hague and now play with prestigious Baroque orchestras in London and Mainland Europe.

A founder member of the Irish Chamber Orchestra, Thérèse played with them for 23 years. She was leader for 13 years, and appeared as Soloist and Director regularly. She was also Co-Leader of the Cologne Chamber Orchestra and toured extensively throughout the world with them.

A member of the RTE Symphony Orchestra for many years, she appeared with them on many occasions as Soloist and Guest Leader.  In 2000 Thérèse was invited to become leader of the RTE Concert Orchestra, a position she held for 5 years. She was also one of the leaders of the Wexford Festival Opera Orchestra from 2008- 2016. For the last 30 years, she has successfully managed to balance her love of Baroque music with her career on modern violin. She has an extensive repertoire which includes music written in the 1600's through to music of the present day.  She has had numerous works written for her by some of Ireland's finest composers including John Kinsella, Philip Martin, David Byers, Frank Corcoran, James Wilson and Eric Sweeney. She has appeared as Soloist with Nigel Kennedy, James Galway, Iona Brown, Friedemann Immer and has worked with Directors such as Charles Mackerras, Harry Bicket, Andrew Manze, Steven Bishop Kovacevich, Roy Goodman, Sir John Barbirolli, Yehudi Menuhin, Christopher Hogwood. She has also appeared at some of the world's most prestigious festivals including Edinburgh, Mostly Mozart (NY), Leipzig Bachfest, BBC Proms, Barossa Valley (Australia), Aldeburgh, Istanbul, Montreux, Spitalfields, Kilkenny, Wexford and specialist Handel Festivals in Göttingen, Halle and Karlsrühe.

Thérèse was a tutor for the Irish Youth Orchestra for over 25 years. She is a regular examiner at the Royal Irish Academy of Music. She studied violin in Dublin with Jaroslav Vaneček, in Italy (Siena and Trieste) with Franco Gulli and Vladimir Szerlak, and chamber music with Riccardo Brengola, masterclasses with Manoug Parikian in Oxford.  She also studied flute with Eithne Delaney in Dublin and had conducting lessons with Janos Fürst.

In 2017 Thérèse was appointed as an Adjunct Professor in the School of Music, UCD.

Ciarán is Head of the UCD School of Music and Assistant Professor of Orchestral Conducting. He has been Artistic Director of the UCD Symphony Orchestra since its foundation in 2002, directing over 50 performances, including concerts in Belgium, France, Germany, Sweden and the UK. He teaches modules on performance, analysis, orchestration and twentieth-century music. He has also been a lecturer in orchestral conducting for the BMus Performance Degree at the Royal Irish Academy of Music and for the MA in Film Scoring at Pulse College, Windmill Lane Studios. He is currently Membership Secretary of the SMI (Society for Musicology in Ireland) and Chair of CHMHE (Council of Heads of Music in Higher Education).

Ciaran's academic work has included contributions to conferences in Ireland, Spain, the UK and the United States, and articles on the composers Erik Satie, György Ligeti and Bernard Herrmann. His PhD thesis – "The (Syn)Aesthetics of Modernism" (2008) – was an examination of interactions between music and visual art in the early 20th century. His current research is focused on contrasting roles of the modern conductor, and the machine aesthetic in twentieth-century music.

Eamonn Jordan is Professor in Drama Studies at the School of English, Drama and Film, University College Dublin.  His books include: The Feast of Famine: The Plays of Frank McGuinness (1997), Dissident Dramaturgies: Contemporary Irish Theatre (2010), From Leenane to LA: The Theatre and Cinema of Martin McDonagh (2014), The Theatre and Films of Conor McPherson: Conspicuous Communities (2019), and Justice in the Plays and Films of Martin McDonagh (2019).