Professor William Gallagher is the inaugural recipient of the Irish Association of Cancer Research (IACR) Cancer Research Medal. This prestigious award recognises his outstanding contribution to the cancer research community in Ireland throughout his career. 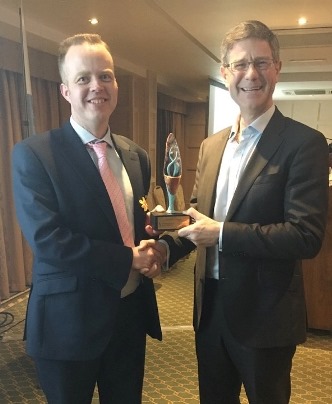 Professor Gallagher, a Professor of Cancer Biology at University College Dublin, is Director of the UCD Conway Institute, and of BREAST-PREDICT, the Irish Cancer Society’s first Collaborative Cancer Research Centre. BREAST-PREDICT is a country-wide multi-disciplinary collaboration among experts in the area of breast cancer research, involving researchers from six academic institutions and a clinical trials group, funded by the Irish Cancer Society.

Professor William Watson, President of the IACR presented Professor Gallagher with the award at the 2017 IACR Conference held in Kilkenny on 22nd-24th February. He described the outstanding contribution of Professor Gallagher to the Irish cancer research community over the years.

Highlighted in particular was his early understanding of the importance of commercialisation of research outputs, and protection of intellectual property, when research and development activities in Ireland were still in their infancy.

Professor Gallagher is the co-founder and Chief Scientific Officer of OncoMark Ltd., which is focused on the development and application of biomarker panels for cancer, primarily aimed at identifying risk of recurrence.

In 2016, the company was awarded €2.75 million from the EU Horizon 2020 SME Instrument programme to clinically validate a prognostic test for breast cancer, called OncoMasTR, which is based on a panel of genetic ‘drivers’ of breast cancer. OncoMark recently secured a further €2.1 million in investment to support the commercial development of this assay, which they plan to launch in 2018.

Accepting his award, Professor Gallagher thanked his peers and mentors, and gave his perspective on the cancer research ecosystem in Ireland, in his talk entitled ‘Cancer (Research) in Ireland: Past, Present and Future’.

He described the past contributions of unsung heroes of Irish cancer research, such as Dr. Denis Burkitt, who first described Burkitt’s Lymphoma, and Dr. Mary Cole, who co-authored the first clinical study on the use of tamoxifen in treating breast cancer patients, in 1971.

He went on to highlight the exceptional quality of cancer research ongoing in Ireland today, with high-impact publications, increasing rates of participation in clinical trials and excellent training programmes in place for up-and-coming researchers.