The COVID-19 crisis has seen a global mobilisation of research activity. Legions of researchers are working on new ways to control the new SARS-CoV-2 virus, including the development of a vaccine.

But an old vaccine has also garnered much attention in the media* recently: BCG, the Tuberculosis (TB) vaccine. Some researchers have suggested that BCG vaccination may provide protection against COVID-19.

What is the history behind this vaccine and why is it being suggested for use against COVID-19?

The BCG - bacillus Calmette Guérin - vaccine is named after the two French discoverers, Albert Calmette and Camille Guérin. It is the only available vaccine against TB and is the most widely used vaccine in the world, having been given to over 4 billion people. Despite the widespread use of BCG, TB is still the deadliest infectious disease in the world - it kills 1.5 million people annually. 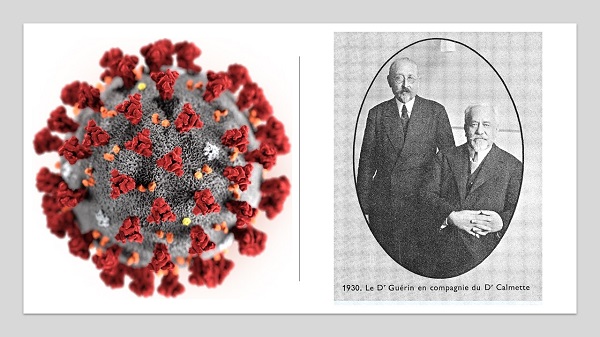 Picture: COVID-19 and the pioneers of the BCG vaccine, Calmette and Guérin

BCG was developed from the animal-adapted TB bacterium Mycobacterium bovis. But why use an animal TB pathogen to develop a human TB vaccine? It was a classic case of serendipity.

Calmette and Guérin were exploring how bacteria cause TB. One particular research avenue was to test whether TB bacteria that were ingested (rather than inhaled) could go on to cause TB in the lungs. They used Mycobacterium bovis to explore this as it causes TB in cattle and can contaminate milk, hence a likely route for the bacteria to be ingested by humans. Guérin, a veterinarian, was able to procure the M. bovis from his former mentor, Emile Nocard, the Director of the veterinary school at Alfort, France.

Using animal models, Calmette and Guérin showed that M. bovis introduced orally did indeed cause TB disease in the lungs. However, to make their experiments reproducible they needed to use fine bacterial suspensions for their infections - mycobacteria are notorious for sticking together in clumps as they grow. They started using a detergent, bile, during in vitro culture to break up bacterial clumps, and noticed that growth of the bacteria in this way reduced its ability to cause disease. They had chanced upon a route to a TB vaccine.

Louis Pasteur, Calmette’s mentor, had shown that pathogens could be weakened, or attenuated, by repeated cycles of in vitro growth. These attenuated variants could be used to inoculate individuals, triggering an immune response that would protect against a future encounter with the fully virulent pathogen.

Step by step, Calmette and Guérin continued their in vitro growth of M. bovis over 13 years, showing that animals inoculated with these attenuated variants were protected against infection with M. bovis. A stable, attenuated form of M.bovis was fixed by 1921, the bacillus Calmette and Guérin, also known as BCG.

The first use of the vaccine to protect against TB in humans was by Dr Weill-Hallé, who approached Calmette and Guérin in 1921 to use their potential vaccine in a child whose family had a history of TB. This first child showed no ill effects six months after BCG vaccination, leading to extended tests in children over the next three years. By 1928, an expert committee of the League of Nations recommended the use of BCG as a TB vaccine.

BCG use gained support globally, but it was slower to be used in some quarters (including Ireland) due to persistent fears about BCG’s potential to switch back to a fully virulent pathogen, and questions about its efficacy in protecting against TB.

BCG has never reverted back to become fully virulent. We now know that key genes, which the bacteria needs to cause disease are permanently lost from it's DNA. And while clinical trials have shown variable protection afforded by BCG against pulmonary TB in adults, there is no doubt that BCG protects children against disseminated forms of TB disease such as meningitis. As such, BCG is given to 120 million children annually as part of the WHO’s childhood immunization programme.

This question has been fuelled by the apparent correlation between countries with childhood BCG immunisation programmes and reduced incidence of COVID-19 infections. These studies are fraught with confounders and are too preliminary to draw any conclusions. However, previous studies have identified correlations between BCG vaccination and non-specific protection in children against pneumonia and septicaemia.

Furthermore, an immunological mechanism that may provide a clue to nonspecific protective effects of BCG is called “trained immunity”, whereby vaccination with BCG can trigger an immune response against subsequent exposure to an unrelated pathogen. These ideas have led to clinical trials being set up in the Netherlands and Australia to test whether BCG affords any protection against COVID-19.

In the current situation, it is reasonable that clinical trials should test the hypothesis of BCG cross-protection against COVID-19. However, given the vital role of BCG in protecting children against TB, it is essential that global usage of BCG is not diverted away from children who desperately need this vaccine. Based on available evidence, the WHO does not support use of BCG against COVID-19.

Should ongoing clinical trials show BCG to have some efficacy in protecting against SARS-CoV-2, there will be a certain irony in using a 100-year-old vaccine derived from an animal pathogen to defeat a new animal-derived pathogen. It also speaks of the need for multidisciplinary research to address the challenges that face us.

Professor Stephen Gordon is the thematic lead for the One Health strand of research within the Institute. He holds a joint appointment as Professor in Infection Biology across the UCD Schools of Veterinary Medicine; Biomolecular and Biomedical Science; and Medicine. His own research focus is on the exploitation of the genome sequence of human pathogen, Mycobacterium tuberculosis, and the bovine pathogen, Mycobacterium bovis, to accelerate vaccine and diagnostic development.