From the Archives: Laying of Cornerstone

From the Archives: Laying the Foundation Stone of the new Veterinary School, 11 December 2000

On 11 December 2000, An Taoiseach, Bertie Ahern, laid the foundation stone of the new Veterinary School on the Belfield Campus. The President of UCD, Dr. Art Cosgrove, welcomed a gathering of 200 guests, which included the Lord Mayor of Dublin, Mr. Maurice Ahern, and past and present members of the UCD and Veterinary College Community. The President said it was heartening to see the new college finally being built after 25 years of planning and he thanked all the veterinary graduates, agri-food businesses and veterinary pharmaceutical companies for contributing £7.5 million to date towards the funding of the buildings. 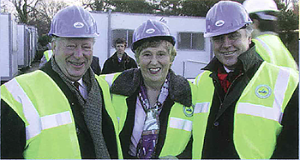 An Taoiseach Bertie Ahern then offered his congratulations to the veterinary profession on their college centenary. He said that the old veterinary college in Ballsbridge had served Ireland well, and that Irish vets both in private practice and the public sector would all have happy memories of their college days. The shortcomings of the facilities in recent years had been recognised by the Government, with a commitment of over £21 million towards the construction of the new Faculty of Veterinary Medicine. This will provide first class accommodation and facilities that are consistent with the highest standards in veterinary education, research and clinical treatment.

He acknowledged that the veterinary profession has responded well to the demands for increased public health and consumer safety. The public needs to look to the profession for protection against the risks to human health posed by animal diseases and one of the main challenges at present is the management of BSE. Given the importance of the livestock sector within the economy and to rural lreland in particular, management of the BSE issue is of the utmost seriousness to Ireland. In conclusion, the Taoiseach said he wished the Faculty of Veterinary Medicine the very best in developing the new facility and had little doubt that the new Veterinary College will serve the country well and be a source of pride to all. The opening ceremony ended with a reception in the O'Reilly Hall. 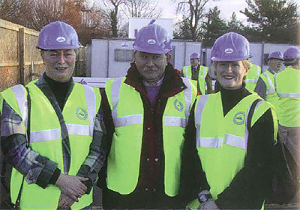 The Silver Trowel - The College Celebrates the Old and the New

It is fitting that in the same year as the foundation stone of the new veterinary college has been laid, the profession is celebrating its college centenary. In the nineteenth century, many abortive attempts were made to start a veterinary school in Ireland to help fight zoonotic diseases like glanders and TB. In 1894, a group of physicians led by the then Professor of Medicine, Sir Christopher Nixon, finally managed to get £15,000 in funds from the Government in addition to money raised from private sources to build the veterinary college.

The veterinary charter was granted in 1900 and Sir Christopher Nixon became the first president of the college. He laid the foundation brick of the veterinary college in Ballsbridge on 21st March 1901 using an engraved silver trowel, which was kept as a family heirloom for many years. It was this very same trowel, presented to the veterinary college by the Nixon family, which An Taoiseach, Bertie Ahern, used to lay the foundation stone of the new college. In his opening speech, the President of UCD, Dr Cosgrove, extended a special welcome to Sir Simon Nixon, Louise Dixon and Jack Counihan, the great grandchildren of Sir Christopher Nixon. Sir Simon flew over specially from the UK for the foundation ceremony.