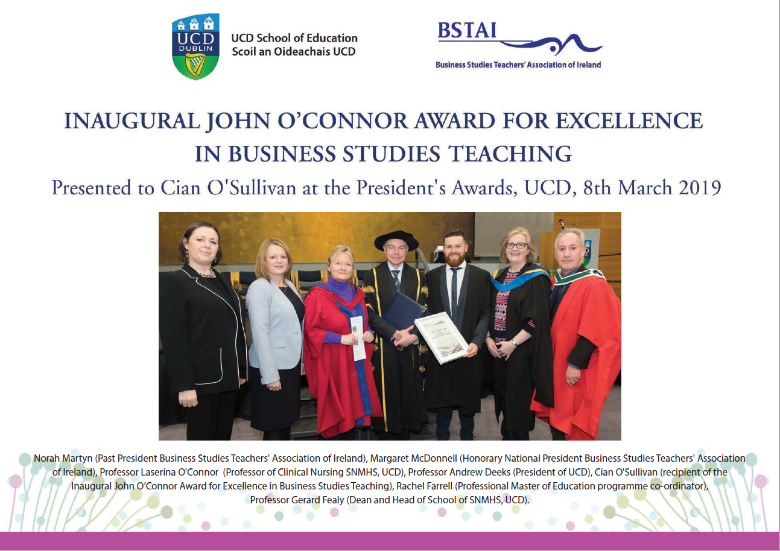 Held on 8th March 2019 to celebrate outstanding student achievements, the UCD Awards Day ceremony included the inaugural John O’Connor Award for Excellence in Business Studies Teaching. Commissioned by the Business Studies Teachers Association of Ireland (BSTAI) and adopted by the UCD School of Education, the award was made to commemorate the memory of John O’Connor, a graduate of UCD, with a Bachelor of Commerce (1971) and a Higher Diploma in Education (1972).

The presentation of the inaugural Award was preceded by a short address given by Margaret McDonnell, Honorary National President of the BSTAI, who said that through the Award, future generations of Business teachers will recognise John O’Connor’s contribution to Business Education and to the scholarship of teaching. She said that John O’Connor’s legacy to Business Education is immense, having spent his life sharing best practise with business teachers and promoting excellence in all aspects of Business Studies Education. He was a founding member of the BSTAI in 1975, serving for a time as Chairperson of its Dublin Branch and as its fourth National President. As well as being a teacher, he was a leading textbook author, with a total of 35 publications from 1976 to 2012. He was also a leading publisher, acting as managing director of a national publishing company, and later running his own publishing company, Blackwater Press Ltd. Throughout his publishing career, John maintained his connection to business teaching, giving workshops to teachers and revision seminars to business students and supporting teachers new to the profession. His final workshop for the Dublin branch of the BSTAI was held in April 2016, just three months before his untimely death in July 2016.

The recipient of the Inaugural John O’Connor Award 2018 was Cian O’Sullivan, a graduate of the Business Professional Master of Education (PME) degree. The UCD President Professor Andrew Deeks presented the Award and also present at the Ceremony was John’s wife Professor Laserina O’Connor of the UCD School of Nursing Midwifery and Health Systems.