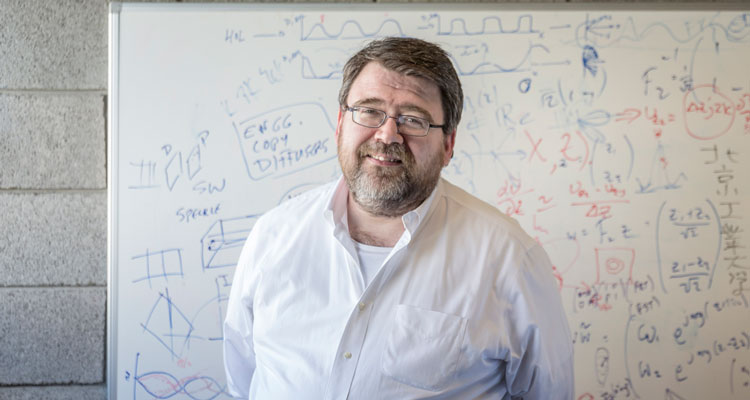 Professor John Sheridan of the UCD School of Electrical & Electronic Engineering has been made a fellow of The Institute of Mathematics and its Applications (IMA).

The IMA exists to support the advancement of mathematical knowledge and its applications and to promote and enhance mathematical culture in the United Kingdom and elsewhere, for the public good.

It is the professional and learned society for qualified and practising mathematicians, with a membership of around 5,000 comprising of mathematicians from all sectors, as well as those with an interest in mathematics.

IMA Fellows have a minimum of seven years’ experience and hold a senior managerial or technical position involving the use of, or training in, mathematics.

He received his Bachelors degree (H1) in Electronic Engineering, from University College Galway (NUIG) in 1985, and his Masters degree in the Science of Electrical Engineering, from Georgia Tech, in 1986. While at GT he worked as a Research Assistant of Prof. William T. Rhodes.

In 1987 he matriculated as a member of Jesus College Oxford and in 1991 he was awarded his doctorate by Oxford University for work carried out under the supervision of Prof. Laszlo Solymar and Prof. Colin J. R. Sheppard.

This was followed by postdoctoral fellowships, supported in (1991) by the Alexander von Humboldt Foundation and later (1992) by a European Community Bursary. Both held at the Lehrstuhl fur Angewandte Optik in Erlangen-Nürnberg University, under the leadership of Prof. Dr A. W. Lohmann.

In 1994 he took up a position as a visiting scientist at the European Commission Joint Research Centre, Italy. In 1997 he returned to Ireland as a permanent lecturer in the School of Physics, DIT.

He joined UCD, in 2000 as a College Lecturer, became a Senior Lecturer in 2005 and in 2007 Professor of Optical Engineering within the School of Electrical and Electronic Engineering.