Cotter Agritech, has today announced the Irish launch of its award-winning Cotter Crate and SmartWorm app, an innovative hardware and software solution to help sheep farmers reduce handling time and labour costs, and tackle worm resistance via reducing wormer use by approximately 40%, and by identifying worm resilient replacements.

Developed by sheep farming brothers Jack and Nick Cotter, the Cotter Crate was created having recognised the industry’s need for a handling system that focuses on making lamb handling easier, and also caters to adult sheep.

The result is a simple to use system, where the animal is comfortably held under its own weight at operator height, without any pressure being applied, resulting in a calm handling experience for both handler and livestock and reducing animal handling time by up to 50%. 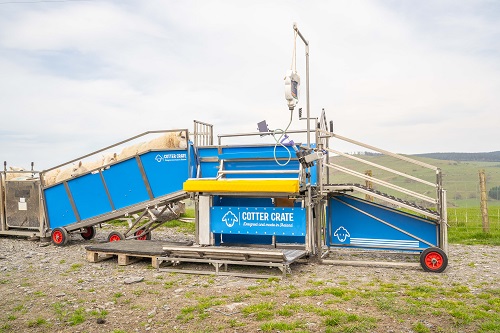 The built-in worming algorithm* enables a sheep farmer to reduce their use of wormers by approximately 40%, without a loss of animal performance, by identifying in real time, which animals would, or would not benefit from a wormer treatment. The algorithm calculates a lambs potential growth based on a number of factors (weight gain, rainfall and temperature, and pasture availability and quality) and gives them an individual target. If they are not reaching this target, it recommends treating the animal. 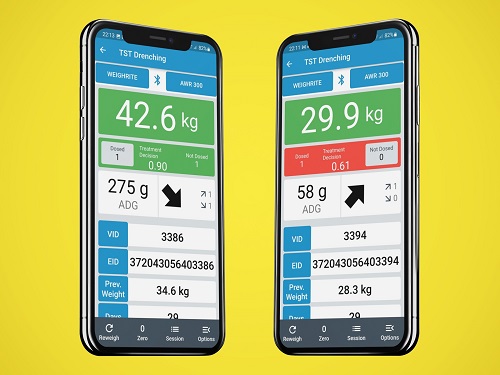 Well-known Irish sheep farmer Brian Nicholson who used the system in 2021 and reduced his wormer use by 42% with no loss of animal performance said, “Not only did I use less wormer, but I’m now able to select replacements that require less worm treatments.  Therefore, I expect the wormer reduction to get better because I can now breed sheep who are resilient to worms. I feel I’m making a huge contribution by farming in a gentler way and towards enhancing the biodiversity and soil health on my farm due to the significant reduction in the use of wormers.”

Welsh farmer Rhidian Glyn, winner of New Entrant at the 2018 British Farming Awards, who saw similar results in 2021 trials, achieving a reduction of 36% in wormer use, said, “Key for me in using this solution was that it fitted into the existing schedule of handling my lambs every 4 weeks. It worked very well – I saved some drench, it was much faster dosing the lambs because I don’t have to dose them all, and there was no loss of performance. It’s a no brainer.”

Jack Cotter, co-founder and CTO, Cotter Agritech said, “Controlling worms is one of the biggest challenges facing sheep farmers in Ireland, the UK and across the EU. Modern worm control is becoming unsustainable due to resistance issues with anthelmintics, or wormers, and negative environmental impacts. Drug resistant worms cost the European livestock industry millions each year.”

He added, “Our hardware and software solution is the most practical, simplest and complete way of reducing wormer use on-farm. Farmers can now do selective worm treatment in a manner which doesn’t slow them down. This solution unlocks this technology onto the sheep farming industry.”

He concluded, “For the average Irish sheep flock (109 breeding ewes), a return on investment using our software solution is delivered within 18 months. This is achieved through delivering wormer and labour savings, breeding improvements, and preventing production losses by slowing resistance development on farm.”

Earlier this year Cotter Agritech completed the inaugural AgTechUCD accelerator programme dedicated to early-stage AgTech and FoodTech start-ups and was named the 2022 AIB and Yield Lab AgTech Start-up at the end of the programme.

Nick Cotter, co-founder and CEO, Cotter Agritech said, “The trend is towards higher welfare and more nature friendly farming, reduction of chemical use and protection of our biodiversity. And this delivers. It will help to preserve and strengthen the sustainability and profitability of Irish farmers and boost Irish agriculture’s social licence. This is a win-win-win, for Irish sheep farmers, for the public and for the environment.”

Cotter Agritech has also been supported with grant funding from the Local Enterprise Office Limerick and Enterprise Ireland.

Farmers who already have suitable weighing equipment to use the algorithm can download the SmartWorm app and avail of a 3-month free trial.

The inventors of the Cotter Crate are brothers Jack and Nick Cotter. They grew up on a sheep farm based in the South West of Ireland running 200 blackface ewes. They are proven entrepreneurs, having founded 2 successful businesses on the home farm – Cotter Bros Firewood, an industry-leading firewood producer, and Cotter Organic Lamb, which direct sells the lamb produced on the home farm to homeowners and local restaurants. Both brothers are still college students. Nick recently received a 2022 Nuffield Scholarship, and his topic is, “Getting off blanket worming: An evaluation of current best practice and newer tools to reduce anthelmintic use and anthelmintic resistance on ruminant livestock farms.”

The algorithm was validated in 2021 in research projects with the UCD Lyons Farm, and with Queens University Belfast, and in testing with 18 commercial sheep farmers across Ireland and the UK. The testing group included over 4500 lambs and more than 18 different breeds in lowland, hill and mountain conditions.

The product is supported by government grant aid for Irish farmers under the Targeted Agricultural Modernisation Scheme (TAMS).