The ambitious goal of the project was to create a new MIDI controller that would allow a musician to bend each note, finely control velocity, inject vibrato, and articulate precise aftertouch effects.

Philip Snell, CEO and co-founder, Joyst, said, “From day one, the vision for the JV-1 has been simple, electronic music with no creative compromises. Why can’t a MIDI controller let you bend notes like an electric guitar? Even on the earliest prototype, we could see the power of joysticks in this role. They allow the player to inject subtlety and fine intonation into their playing, with a tactile and responsive feel. The buttons and pads you find on  traditional MIDI controllers are just too one-dimensional, sterile and overly digital. Joysticks restores what was lost, a full range of motion, a responsive springiness, organic bends, fresh sounds. Electronic music in full colour.” 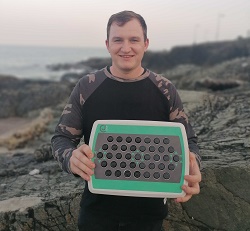 Joyst was co-founded by Philip and fellow UCD Master of Engineering graduates, William Langrell and Edward Byrne, along with Dr Cuffe, to commercialise the JV-1 MIDI controller.

The Joyst JV-1 feature set is impressive. The 39 joysticks naturally cover two octaves in an easy-to-learn layout, but down-clicking each one gives an additional overblow octave-shift to dynamically expand the range. The note layout is completely isomorphic, so once you have learned the shape of a major chord, it’s the same no matter the root note. Likewise for scales, or other chord types to deliver less learning and more playing.

To produce sounds, the JV-1 can be coupled to any DAW (Digital Audio Workstation), hardware synth, or even your phone using a USB OTG (On-The-Go) cable.

The JV-1 leverages a recent extension of the MIDI protocol, termed MPE (MIDI Polyphonic Expression). This backward-compatible standard, ratified in 2018, allows note-specific pitch bend and aftertouch signals to be relayed from a MIDI controller to a synthesizer. www.joyst.ie

At NovaUCD, the hub for new ventures and entrepreneurs at University College Dublin, we nurture and support new high-tech companies, such as Joyst, as part of UCD's mission. At NovaUCD we provide purpose-built, state-of-the-art incubation facilities alongside a comprehensive business support programme for client companies. NovaUCD has been funded through a unique public-private partnership that includes AIB Bank, Arthur Cox, Deloitte, Enterprise Ireland, Ericsson, Goodbody Stockbrokers, UCD and Xilinx. www.novaucd.ie