Autonomous delivery enables a single Manna employee, managing multiple drones, to operate almost 20 deliveries per hour, 10 times the number that can be done with traditional road-based delivery. The service is quieter, greener, faster, respects privacy and is safer than road-based alternatives.

Bobby Healy, CEO and founder, Manna, said, “The Covid-19 pandemic forced consumers across the world to re-assess how they source their goods and opened our eyes to the fragility of our supply chains. There is a huge appetite for a greener, quieter, safer and faster delivery service, and we’re excited to use this fresh round of funding to expand operations and offer our service to even more customers.”

He added, “We are already working with our partners to deliver grocery products, takeaways and pharmaceutical supplies, and as we continue to scale our fleet of drones we will also begin supporting critical medical deliveries.” 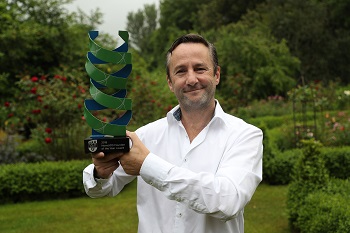 Manna is currently trialling its service in Oranmore, Co. Galway, representing the largest drone delivery trial of its kind globally. The drone hub supports over 100 takeaway deliveries a day directly to the homes of the nearly 10,000 Oranmore residents and has been a huge success with more than 30% of the population already using the high-speed service.

Manna has also signed partnerships with major brands and retailers, including JustEat, Samsung, Ben & Jerry’s and Tesco plc - one of the largest grocery retailers in Europe - making 3-minute delivery time to catchment areas as large as 50 square kilometers a reality.

Nicola McClafferty, Partner, Draper Esprit, said, “We are committed to supporting companies that have the potential to change how we live and Manna is a true example of this. Drones will play a key role in building a long term and sustainable delivery infrastructure for communities around the world and Manna is already making that a reality. We are thrilled and privileged to be supporting Bobby and the Manna team as they create the future of food delivery.”

Lukasz Gadowski, co-founder of Team Europe and also co-founder of Delivery Hero said, “With real customers and real deliveries already in place today, Manna has demonstrated the perfect model for drone delivery of takeout food, and I’m super-excited to see them expand and scale. The future is being rewritten and Manna are the clear leaders in this nascent space.”

Last year Bobby Healy was named the recipient of the annual NovaUCD Founder of the Year Award in recognition of his entrepreneurial success and achievements as the Founder of Manna.

Manna Drone Delivery is the world’s first aviation-grade B2B drone delivery ‘as-a-service’ company. The Manna drone fleet - which is autonomous - is operated by Manna directly from the restaurant or dark kitchen premises and is accessible via API to food tech providers and online food platforms alike in a channel-agnostic manner. One fleet for all demand. https://www.manna.aero/

Draper Esprit is a global venture capital firm that invests in high-growth European technology companies. It is listed on the AIM market (GROW) and the ESM segment of the Irish Stock Exchange. Draper Esprit invests in high growth technology companies with global ambitions. One of the most active VC firms in Europe by capital deployed, the firm has completed 125 deals since 2006, invests approx. £150m per year and now has a market cap of over £1 billion. Draper Esprit’s portfolio of privately-owned tech companies is worth over £700m, and includes well-known tech brands such as Trustpilot, Cazoo and Revolut, as well as the next generation of Europe’s global champions like UiPath, Graphcore and ICEYE. https://draperesprit.com/

At NovaUCD, the hub for new ventures and entrepreneurs at University College Dublin, we nurture and support new high-tech and knowledge-intensive companies as part of UCD's mission. At NovaUCD we provide purpose-built, state-of-the-art incubation facilities alongside a comprehensive business support programme for client companies such as Manna. NovaUCD has been funded through a unique public-private partnership that includes AIB Bank, Arthur Cox, Deloitte, Enterprise Ireland, Ericsson, Goodbody Stockbrokers, UCD and Xilinx. www.novaucd.ie