During his address Professor Halligan outlined the Welsh Government’s aim to maintain and grow its extensive research collaborations with Irish and European Union partners, including UCD, in order to continue to generate high impact research leading to future prosperity for all partners.

As Wales’ chief scientific adviser, Professor Halligan, a UCD graduate, provides independent scientific advice to the Welsh First Minister and leads the development of the Welsh Government’s science policy. He also works to promote the study of science, technology, engineering, mathematics and medicine to help build a strong science base in Wales.

UCD itself has established strong research links with universities across Wales over many decades and has collaborated with researchers in a number of areas including; Health, Agri-food and Culture Economy and Society.

During his address Professor Halligan said, “Irish and Welsh universities share a strong history in research and innovation collaboration, such as the CALIN Network, and a range of partnerships and joint activities including the successful INTERREG programme, which represents over 20 years of partnership built around economic, environmental and sustainable development.”

He added, “As the UK leaves the European Union, the challenge for Wales is to maintain and grow its extensive research collaboration with existing EU partners, including UCD and other Irish universities, for the future prosperity of Wales, Ireland and the EU. As Brexit approaches it is therefore very important that Wales and Ireland strengthen and expand their historical and mutually beneficial research collaborations, often facilitated by EU funding, and I look forward to future positive developments.”

CALIN (Celtic Advanced Life Science Innovation Network), a joint Irish-Welsh research programme, is part-funded by the European Regional Development Fund through the Welsh Government. CALIN, which is coordinated by Swansea University and led in Ireland by UCD, delivers R&D opportunities for SMEs in the life sciences sectors, across Ireland and Wales, by offering open access to the network’s partner institutions. 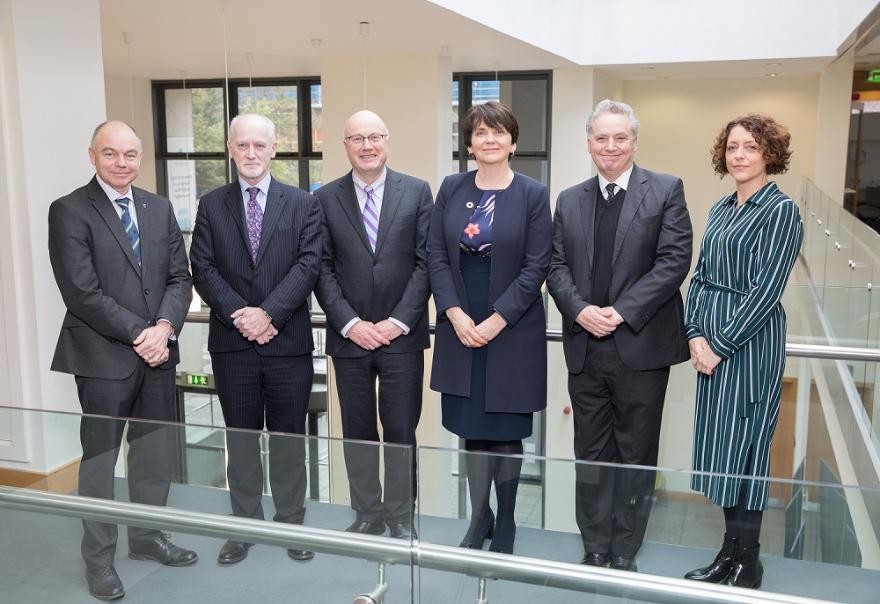 Professor Orla Feely, UCD Vice-President for Research, Innovation and Impact said, “Professor Halligan is playing a critical role in shaping science policy in Wales. We are delighted to welcome him back to UCD, as a distinguished and proud alumnus, to deliver this keynote address.”

“Against the backdrop of a changing external landscape, we are strongly aware of the importance of our significant and long-standing relationships with many Welsh universities. We are taking purposeful steps to strengthen bilateral relations with Welsh universities, and universities across the UK, to ensure that these relationships are not only sustained post-Brexit, but continue to flourish and grow into the future.”

Professor Mark Ferguson, Director General of Science Foundation Ireland and Chief Scientific Adviser to the Government of Ireland, said, “I would like to extend a very warm welcome to Professor Halligan on behalf of Science Foundation Ireland, where we recognise the scientific excellence of institutions in Wales and across the UK. Their researchers bring great value to European research programmes, and particularly to Irish collaborations.”

He added, “Our research collaborations with the UK include lead agency co-funding, as well initiatives like the SFI Research Professorship Programme and the SFI-EPSRC Centres for Doctoral Training. It is important that we build on existing partnerships between Ireland and Wales, and that we innovate together for the benefit of both countries.”

Professor Sarah Prescott, Principal, UCD College of Arts and Humanities, chaired the panel discussion. Professor Prescott was formerly the Professor of English Literature and Director of the Institute of Literature, Languages and Creative Arts at Aberystwyth University.

Professor Halligan concluded his address by saying, “The re-opening of the Consulate General in Cardiff later this year represents an important confirmation of the deepening partnership and concrete recognition of the importance of shared research and economic ties between Ireland and Wales, all of which will be key to sustaining collaboration after Brexit.”

In 1985, he moved from Ireland to work at Rivermead, a specialist NHS neuro-rehabilitation Centre in Oxford as a research psychologist while also perusing a PhD in neuropsychology. In 1987, he joined the Neuropsychology Unit at the Department of Clinical Neurology in Oxford University and in 1997 following a MRC Senior Research Fellowship award joined the Department of Experimental Psychology in Oxford.

In 2000, he moved to Cardiff’s School of Psychology as a Distinguished Research Professor. In 2003, he became the founding Director of the Cardiff University’s Brain Research Imaging Centre (CUBRIC) and later in 2006 Dean of Interdisciplinary Studies at Cardiff University. In 2012, he joined Universities Wales as Head of Strategic Futures as part of a 2 year secondment. From there he became Chief Executive of the Learned Society of Wales in 2015.

In March 2018, he moved from the Learned Society of Wales to become the third Chief Scientific Adviser for Wales.