Taoiseach Micheál Martin TD today officially opened a €6.7 million expansion of NovaUCD, the Centre for New Ventures and Entrepreneurs at University College Dublin (UCD), during a visit to the University.

The project involved the renovation and expansion of NovaUCD’s East Courtyard and has resulted in 800m2 of additional licensable space enabling NovaUCD to increase its capacity to house high-tech start-ups with global ambitions by over 50%. The new facility includes 20+ business units and laboratories and a new co-working space. NovaUCD can now support over 450 founders and their teams.

Taoiseach Micheál Martin TD said, “I am delighted to be visiting University College Dublin today to officially open the €6.7 million expansion of the NovaUCD facility. Since opening in 2003 NovaUCD has become one of the leading hubs in Ireland’s start-up ecosystem supporting ambitious entrepreneurs and innovative high-tech companies.”

“With NovaUCD’s strong track record, and now with its significant increase in capacity, I am sure it will continue to flourish in the future as it continues to assist entrepreneurs who want to locate at NovaUCD and leverage its excellent facilities, accelerator programmes, expertise and network to help them to grow and scale their start-ups on the global stage.” 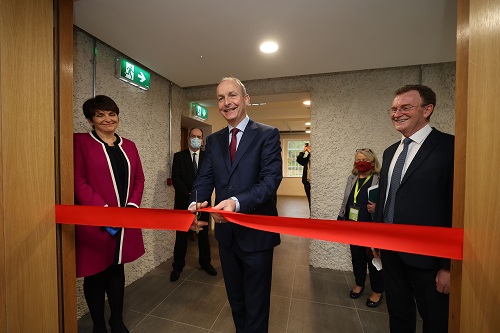 During a tour of the facility the Taoiseach received technology demonstrations from a number of start-ups already located in the new wing including, Equal1 Laboratories, Manna, Output Sports and PlasmaBound.

Equal1, Ireland’s first quantum computing company, has secured over €10 million in initial funding to accelerate the introduction of the world’s most compact and cost-effective quantum computers.

Manna which has already secured over $35 million in funding from international venture capitalist firms is now planning on raising a further $50-$100 million in additional funding in 2022 to expand its drone manufacturing capability and scale its drone delivery service across Ireland.

Output Sports has to date secured clients in 18+ countries around the world across 30+ sports, at professional and sub-elite levels, for its technology to test multiple components of athletic performance and track training programmes, using a single matchbox sized wearable sensor. 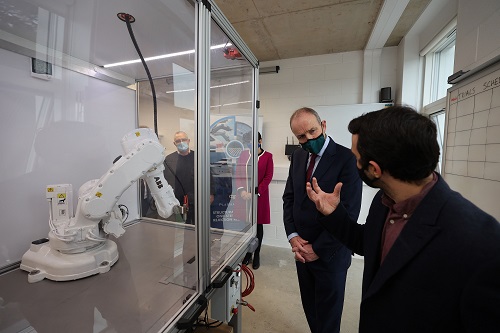 Professor Orla Feely, UCD Vice-President for Research, Innovation and Impact, said, “We are delighted to welcome the Taoiseach to officially open NovaUCD’s East Courtyard expansion today. UCD is committed to Ireland’s development as an innovation leader through its role as an engine of economic, cultural, and social growth.

"Since 2003 NovaUCD has supported over 400 companies and early-stage ventures and by investing in the expansion of NovaUCD’s East Courtyard we are substantially increasing our capacity to support the development and scaling of high-tech start-ups in line with Shaping the Future, UCD’s Strategy for Research, Innovation and Impact.”

Tom Flanagan, UCD Director of Enterprise and Commercialisation said, “Over the last few years we have doubled the number of start-ups that we are creating from UCD research and we have supported them to more than triple the seed investment they attract. We have also increased the number of accelerator programmes we run with partners such as the European Space Agency, Ericsson, Vodafone, Enterprise Ireland and IADT Media Cube, so the timing is right for this expansion.”

He added, “We have a growing and vibrant community of very successful entrepreneurs at NovaUCD and we look forward to welcoming and supporting the next generation of entrepreneurs in the years ahead.”

Since opening in 2003 NovaUCD has developed an excellent infrastructure, a range of comprehensive business support programmes, including accelerator programmes, and a peer-support ecosystem of experienced mentors, founders, alumni, investors and sponsors, that nurtures an enthusiastic and dynamic community of talented entrepreneurs at NovaUCD and across the UCD campus.

NovaUCD has to date supported over 400 companies and early-stage ventures including companies such as, BiancaMed, Carrick Therapeutics, Corlytics, Equinome, Life Scientific, Logentries, MagGrow, NovoGrid, OncoMark, OxyMem, Supernode, Terra Solar and Vivid Edge. NovaUCD supported companies have to date raised over €775 million in equity funding and employ thousands of people directly and indirectly between them.

Equal1 Laboratories, a UCD spin-out, is developing a new type of quantum computer based on the latest advances in semiconductor CMOS (complementary metal-oxide semiconductor) technology. The company, which also has a base in California was founded by Dr Dirk Leipold, Professor R. Bogdan Staszewski and Mike Asker, as a spin-out from the UCD School of Electrical and Electronic Engineering. https://www.equal.com

Manna’s mission is to replace road delivery with eco-friendly and fast drone delivery in communities across the world. The company was founded by Bobby Healy. www.manna.aero

PlasmaBound is helping industries lose weight and reduce their Carbon footprint globally. The company was co-founded by Dr James Nicholas Barry, Alan Barry, and Xavier Montibert as a spin-out from the UCD College of Engineering and Architecture. www.plasmabound.com