A new study carried out by University College Dublin (UCD) academics, published today, has revealed that in typical Irish commuting conditions, Toyota’s hybrid powertrain system drives in zero emissions mode (ZEV) for significantly more than half (62%) of the time and over 40% of the distance covered.

Those were the key findings of a study carried out by four UCD academics and commissioned by Toyota Ireland through ConsultUCD, the University’s managed consultancy service.

Zero emissions mode describes the time the internal combustion engine is not running and the vehicle is therefore emitting no pollutants. The longer the car is in ZEV mode the more significant the air quality benefits for other road users.

The study tracked seven drivers who commuted to UCD, Belfield from Drogheda, Wicklow, Aughrim, Smithfield, Blackrock and Dundrum (2), over a full week each during last November, combined with normal additional family driving. Conclusions are based on the analysis of the more than 2,000 kilometres of driving across motorways, rural roads and city driving that resulted.

The routes reflect typical Irish commuting conditions. The researchers measured the time the cars spent in zero emissions mode versus internal combustion mode. No restrictions or driving guidelines were given to the drivers.

Associate Professor David Timoney, UCD School of Mechanical and Materials Engineering. said, “We were delighted to carry out this study to investigate the energy behaviour of Toyota’s hybrid powertrain system across typical commuting conditions in Ireland.  Highlights of the study include a high percentage of zero emissions driving recorded across a wide range of conditions, which may provide environmental benefits for the wider population. Also noteworthy is the close agreement of the measured fuel economy with the official worldwide harmonised light vehicle test procedure figure.”

Commenting on the study, Toyota Corporate Affairs Director, Mark Teevan, said the UCD study confirms that Toyota Prius hybrids spend the majority of their time in zero emissions mode and provides vital learnings for Ireland as the country sets about decarbonising the Irish car fleet.

He said, “This is the first study of this type carried out in Ireland, and we anticipate its results would be replicated across the country and also across the range of newly launched Toyota hybrid models. It conclusively shows that our self-charging hybrids are in zero emissions mode for well over half of their journeys, including on long drives. It underlines the fuel economy and positive environmental impact that self-charging hybrids can bring to society with reduced C02 and improved air quality, which, in turn, can deliver significant health benefits for cyclists and pedestrians traveling the same routes.”

“Self-charging hybrids have a significant role to play in decarbonising the car fleet and in delivering electrified driving to the Irish consumer. It’s clear that hybrids deliver societal benefits for both rural and urban drivers. These cars do not need additional infrastructure or behavioural change from drivers. In a country with over 2 million cars with combustion engines, there are clear and tangible benefits from self-charging hybrids that drive 60% of the time in zero emissions mode.” 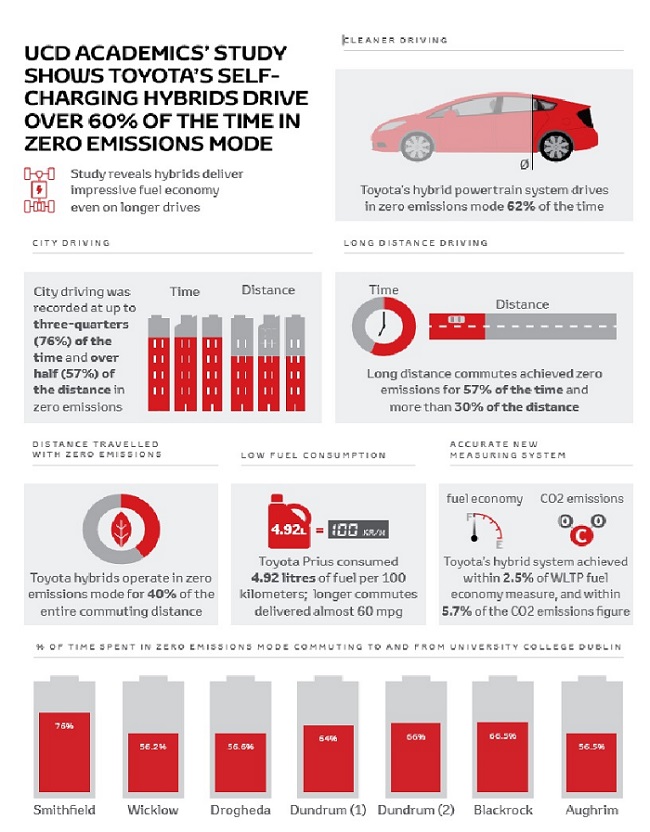 The study sampled a number of journeys that reflect typical urban, outer suburban and provincial driving conditions in Ireland.

Meanwhile, the commuters from Drogheda, Aughrim and Wicklow town to UCD spent over half (56%) of their time in zero emissions mode over the respective 644 km, 452 Km and 293 Km driven over the course of the week’s testing.

The study also revealed that, on average, fuel consumption for the Prius was 4.92 litres per 100 kilometres (57 mpg) and average C02 emissions were 114.2 grammes per kilometre. The three drivers with the longest commutes had the best fuel economy, averaging almost 60 mpg, a fact that clearly demonstrates the merits of hybrid cars for long distance driving.

According to Toyota, Ireland has been something of a laggard in Europe when it comes to adopting alternative powertrains. Mark Teevan added, “The majority of new car sales continue to be of conventional combustion engine type. While battery electric vehicles (BEVs) are growing in popularity, it will be quite some time before they can be considered fully mainstream given concerns about range limitations and inadequate recharging infrastructure, together with lack of available models and supply constraints.”

“However, our self-charging petrol electric hybrids have no such limitations. They provide an electric driving experience to suit almost any user and with no requirement for additional infrastructure. They are therefore the means to an urgent democratisation of electrification for the private car.”

Interestingly, the study also provides an early validation of the new EU-mandated vehicle test regime (WLTP), since the results achieved closely match the official figures for both fuel economy and CO2 emissions (calculated) for the Prius.

Toyota are the first vehicle manufacturer to have removed diesel passengers cars from its line-up and this year over 80% of its car sales in Ireland will be self-charging hybrid models in keeping with its promise of “Built for a better World”.

The Prius IV is the first production iteration of both Toyota’s fourth generation hybrid powertrain and of its new global architecture. Toyota Ireland has announced it intends to commission similar tests later this year with the new hybrid models that are being launched through the first months of 2019.

About the report: The objective of the research, which was commissioned and funded by Toyota Ireland, was to investigate the energy behaviour of the Toyota Prius IV hybrid vehicle, under a set of conditions that may be considered representative of regular commuting patterns in Ireland.

The research consisted of recording and analysing commuting data from seven volunteers, all of whom are employees of University College Dublin. Each volunteer was supplied with a Toyota Prius IV hybrid vehicle for one calendar week during the period November 4th-19th 2018. The overall test data was built from an ensemble of 157 individual trips, which when aggregated together, cover 2,018 km.

ConsultUCD is UCD’s managed consultancy service that enables business, industry, public sector and not-for-profit organisations to benefit fully from the wealth of expertise generated by UCD. Our academics, from all disciplines, work with organisations to answer complex or technical questions, influence strategy or policy and find innovative solutions to a wide variety of challenges.

ConsultUCD provides facilitated access to UCD’s expertise and supports the consultancy engagement from initial enquiry to end result. ConsultUCD is based at NovaUCD. www.ucd.ie/consultucd