Debenhams and its workers – an ominous new normal?

Just over five years ago today, on June 12th, 2015, over 1,400 employees at Clery’s Department Store were informed at 5.30pm that they were to be made redundant, and that they had to vacate the store by 6pm. Some had been working in the store for over 20 years. The shop was to go immediately into liquidation.  The US owners of Clery’s, the Gordon Brothers, divided the store into two companies - a trading company – OCS operations, and a property company - OCS property. Following losses in the former, but rising profits in the latter (of approximately  €6.5m) both companies were to be sold. Natrium paid  €29 million for Clery’s in 2015 and sold it recently for €63 million. The peremptory and hard-nosed nature of the dismissal, the fact that the State was singularly liable for the statutory redundancies, as well as its legal basis, led to the Minister for Jobs at the time, Richard Bruton, and Minister for Business and Employment, Ged Nash, to commission the Cahill-Duffy report. The Report examined the protections in law for employees, in a context where corporate restructuring  was a used as a basis to avoid a company’s meeting its obligations to its employees.  The proposals the report suggested, included an amendment to the Protection of Employment Act, making it mandatory for employers to engage with employees for a minimum of 30 days in the case of collective redundancies, increasing compensation to workers, a more rigorous implementation of the Companies Act of 2014, and recovering assets where a fraud was seen to have been effected.

After continuing protests and campaigning by the Justice for Clery’s Workers group,  and those made unemployed, finally achieved a settlement. There was a sense that a dark chapter in industrial relations had been left behind, even though none of the proposals from the Cahill-Duffy report were implemented. 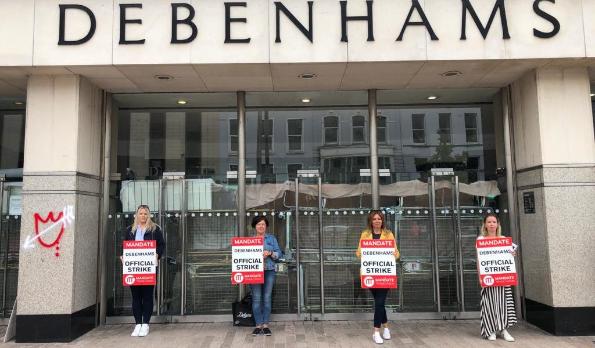 The recent events in Debenham’s, however, casts doubt on this. In April of this year, in the midst of the Corona crisis, about 1,400 workers in Debenham’s Ireland were notified by email that all 11 stores were to go into liquidation as a result of falling revenue and mounting debts. Again, there was no consultation with workers or their representative, nor could the workers meet with their union representatives given the lockdown. The employees had been promised redundancy pay by Debenhams, but the company has now backtracked leaving them with only statutory redundancy funded by tax payers. The relationship between Debenham’s Ireland and Debenhams in the UK – which is still operating, is ambiguous. Although ownership remains nebulous - it is listed as registered in Jersey, Bank of Ireland, Barclay’s Bank, Silver Point Capital and Golden Tree, are all part shareholders of the business, and signed off on closing the stores. The Mandate Union, and those made redundant, have called for Debenhams to engage with workers and unions, and postpone liquidation until consultations concerning the stores finances can take place. But to no avail. Micheal Martin has called on Debenhams to ‘do the right thing’. The language here is one of benevolence on the part of the employer, rather than of the legally backed rights of employees.

Since the end of May some of those made redundant, the majority of whom were female, have gone on a twenty-four hour strike to prevent the transfer of assets and stock to the UK.

The specifics and the constellation of causes underpinning the closure of both stores partly differs. This includes factors relating to ownership and corporate restructuring. Yet, both Clery’s and Debenhams have undoubtedly been effected by changing consumption patterns and demand fostered, by among other factors, online retailing and consumer preferences – though the online part of Debenhams has seen a growth. What they also share in common is a disregard for their workers, many of whom had worked hard for the business and accrued significant service, sometimes of over twenty years. The latter have effectively been left high and dry, excluded from input, engagement, consultation or renumeration in their redundancy despite the urgings of the Cahill-Duffy Report.

Almost a million people have also lost their jobs in the context of the Covid virus pandemic, and some may feel that the Debenhams’s workers have simply suffered a similar fate. However, given the likely deep recession Ireland will now enter, one has to ask whether such a model of practice effected by these large stores, will be generalised as a template to be followed by other large companies? In other words, if Debenhams can avoid treating its workers fairly, why would any workers expect to be treated fairly in the coming recession?

The current context has forced many of us to reflect on many of our ideas and values, including their understanding of work and their control of our work-life. Economic markets are supposed to be there as something that allow finite, vulnerable, humans to meet their financial needs. But they can also take on a life of their own, as self-directing entities with their own interests, that adversely determine peoples’ economic fate. In a time where a new more sympathetic, solidaristic understanding of humanity and social suffering has emerged, even one reinforced by the State through declarations such as ‘we’re all in this together’ -  the possibility exists for a more compassionate understanding of each other’s economic life chances through the regulation of market forces. If the mistakes from the Clery’s debacle were not learnt, Covid 19 provides an opportunity to rectify current ones, and avoid those in the future. In such a scenario, the State and government specifically need to play a more active role in protecting workers and reinforcing their rights. Whether the government will, despite describing itself as a ‘government of change’, however, remains an open question.

Steven Loyal is Associate Professor of Sociology at UCD.