Are Unexpected Events Positive or Negative Events? It Depends Where You Start

Our 2021 paper investigating the cognition of unexpected events, shows that while people mainly think of unexpected events as being negative events, certain preceding events can change that attitude. This paper won the Early Career Publication – PhD Award from the European Society for Cognitive Psychology (https://www.escop.eu/awards-en-funding/awards/early-career-publication-award). ESCoP said, “The paper addresses very novel questions about how people think of unexpected future events. It is highly original and covers a large amount of literature. It is also well written and represents clear theoretical progress.” 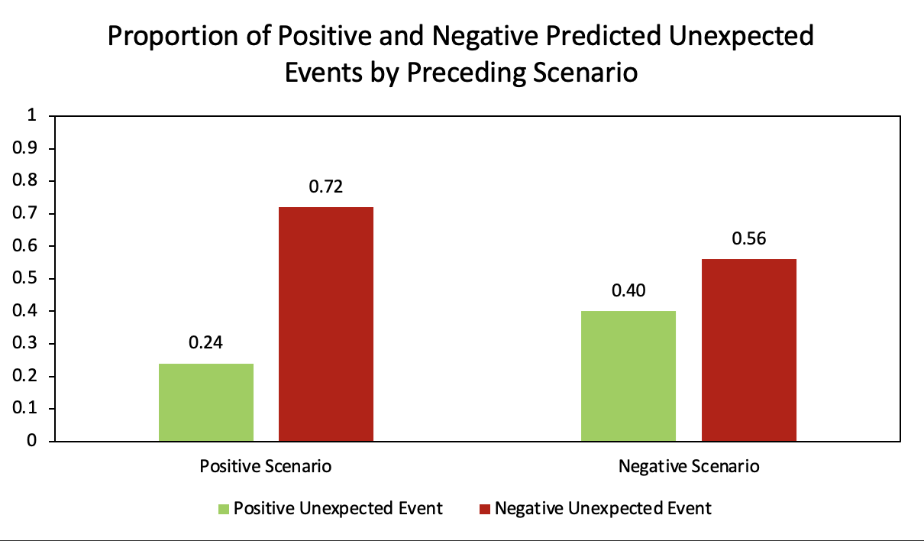 While we cannot completely remove the negativity bias by presenting negative information first (the majority of unexpected events are still thought to be negative), we have shown that we can reduce the probability of a negative event being predicted by pointing out information that is already negative. This shows that people use valence information in the preceding events when considering what might happen next. In fact, this might be useful to know for many prediction tasks and for practices in cognitive behavioral therapy that ask patients to think of all possible outcomes, including the positive ones.

The paper titled, “Do We “Fear for the Worst” or “Hope for the Best” in Thinking About the Unexpected?: Factors Affecting the Valence of Unexpected Outcomes Reported for Everyday Scenarios” is peer-reviewed and available online at Cognition