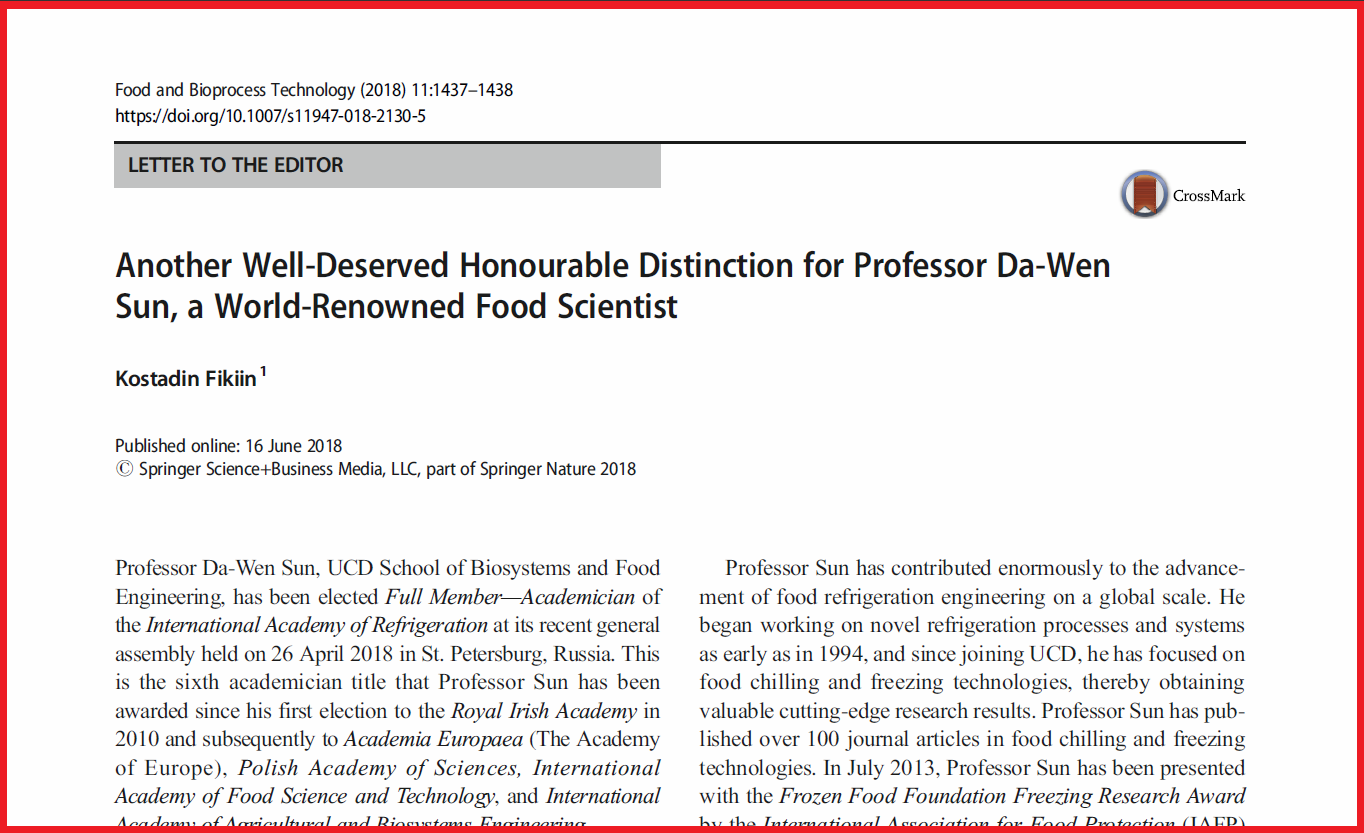 The International Academy of Refrigeration (IAR, www.maxiar.spb.ru) is a non-governmental and non-profit organization, which is comprised of leading scientists, academics, professionals, engineers and businessmen. Its activities focus on solving complex fundamental and applied problems in refrigeration and cryogenic engineering, low-temperature energy, air conditioning, food processing and storage, ecology, economics, cryobiology, cryomedicine, еtc. IAR is headquartered in St. Petersburg, Russia, where it was legally established in 1995, being the successor of the Academy of Refrigeration registered in 1993. Famous academicians of IAR include Nobel laureates and deputies of the State Duma (Parliament) of Russia (e.g., Zhores Ivanovich Alferov, the winner of 2000 Nobel Prize in Physics), and past and present Directors General of the International Institute of Refrigeration based in Paris, France. Alongside the traditionally strong position of IAR in the post-Soviet areas where national and regional branches are established, the Academy enrols full members – academicians, corresponding members and academic advisers from all around the world. The full membership (academician) of IAR represents the highest honour in the concerned field.

Professor Sun has contributed enormously to the advancement of food refrigeration engineering on a global scale. He began work on novel refrigeration processes and systems as early as in 1994, and since joining UCD, he has focused on food chilling and freezing technologies, thereby obtaining valuable cutting-edge research results. Professor Sun has published over 100 journal articles in food chilling and freezing technologies. In July 2013, Professor Sun has been presented with “The Frozen Food Foundation Freezing Research Award” by the International Association for Food Protection (IAFP) for his significant contributions to enhancing the field of food freezing technologies. This is the first time when this prestigious award has been presented to a scientist outside the USA.

Professor Sun is among the world’s top professionals in food engineering research and education. He has published over 500 peer-reviewed journal papers (Web of Science h-index = 89, SCOPUS h-index = 94) with 50 papers being designated by ESI as Highly Cited / Hot Papers in Field. Many of his scholarly works have become standard reference materials, specifically in vacuum cooling, ultrasound-assisted freezing, computer vision of foods, food engineering models involving computational fluid dynamics, etc. Professor Sun has been honoured as one of the “Highly Cited Researchers” in the last three consecutive years (2015-2017) by Clarivate Analytics (formerly Thomson Reuters).

I have had the chance to meet Professor Da-Wen Sun for the first time at the early stage of his career, when he attended the international conference on “Advances in the Refrigeration Systems, Food Technologies and Cold Chain”, which took place in Sofia, Bulgaria, in 1998 and was co-organised by myself under the aegis of the International Institute of Refrigeration. I still remember quite well the professional dynamism, spirit and purposefulness of his participation, which made an obvious impact on the audience. Since then, I have had many further occasions to cooperate and interact with Professor Sun on different joint initiatives and projects, where I have enjoyed the efficiency and accuracy of his contribution. Da-Wen has an impressive professional network of colleagues and friends all over the world and attracts young food researchers around his consolidating figure. As a full member of IAR since 2001, it was a pleasure and privilege for me to nominate him and to act as a promotor for his election to IAR.

Consequently, based on all these circumstances, I take the liberty in expressing the noble feelings of the aforementioned collegial community and in congratulating sincerely Professor Da-Wen Sun for the newly deserved honour. Let us all wish him plenty of health, creative energy and best of success for the future benefit of science, industry and society.