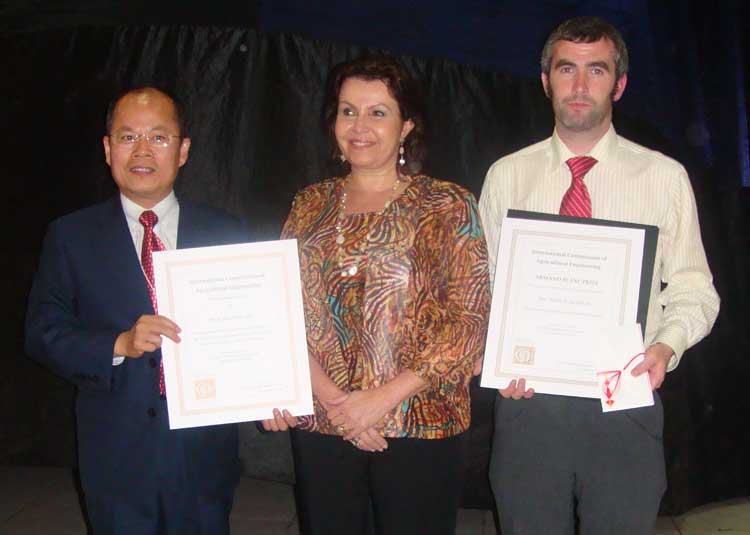 Professor Da-Wen Sun, UCD School of Agriculture, Food Science and Veterinary Medicine, has received the CIGR Recognition Award in recognition of his distinguished achievements as top one percent of Agricultural Engineering scientists around the world according to the ISI  Essential Science Indicators (ESI) database. The CIGR Recognition Award is the most prestigious in the CIGR award system. This award enhances Prof. Sun’s reputation as one of the world’s foremost authorities in Agricultural and Biological Engineering.

PhD Student Patrick Jackman, also from UCD School of Agriculture, Food Science and Veterinary Medicine, has received the CIGR Armand BLANC Prize for his paper entitled “Prediction of Beef Palatability from Digital Image Features”. The CIGR Armand BLANC Prize is awarded to students and young members under 30 years of age for presenting excellent papers at a World Congress. As part of his PhD research, in the paper Patrick developed an automatic computerized system that extracted features of raw beef colour, marbling fat and surface texture from digital images of quartered carcasses. These image features were then successfully used to build accurate predictive models of important palatability attributes. Patrick Jackman’s PhD research is co-supervised by Prof. Da-Wen Sun and Dr Paul Allen from Teagasc.

CIGR established in 1930 is the biggest international organization in agricultural and biological engineering in the world, and its conferences are the most important gathering in the field. The conference took place from the 31st of August to the 4th of September 2008 and was attended by about 1000 participants. The conference featured many papers at the cutting edge of modern agricultural engineering research from subjects as diverse as food safety to power machinery design. A very high standard of research was presented both in the oral presentations and the poster presentations with many of the worlds leading researchers in agricultural and biological engineering contributing papers.