UCD Professor's Research Publications in Agricultural Sciences Ranked No.1 in the World 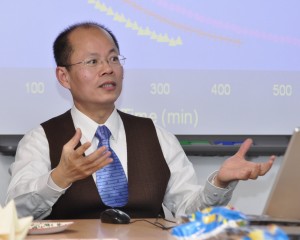 According to the Essential Science IndicatorsTM (ESI) database from Thomson Reuters, which was updated in July to cover the period from January 1, 2005 to April 30, 2015, UCD’s Professor Da-Wen Sun is ranked No. 1 in the world for publication of the highest number of highly-cited papers in Agricultural Sciences.

Professor Da-Wen Sun, UCD School of Biosystems and Food Engineering, is a global authority in food engineering research and education. He is a Member of Royal Irish Academy, a Member of Academia Europaea (The Academy of Europe) and a Fellow of International Academy of Food Science and Technology.

He has significantly contributed to the field of food engineering as a researcher, as an academic authority and as an educator. His many scholarly works have become standard reference materials for researchers in the areas of computer vision, computational fluid dynamics modelling and vacuum cooling.

Highly-cited papers are defined as those papers that rank in the top 1% by citations for field and year indexed in the Web of Science.

Results of Professor Da-Wen Sun’s work have been published in more than 400 peer-reviewed journal papers (Web of Science h-index = 65), among them, 30 papers have been selected by ESI as highly-cited papers, ranking him No. 1 in the world in Agricultural Sciences.

Professor Da-Wen Sun has received many international prestigious awards for his research excellence, including the 2015 IAEF Lifetime Achievement Award presented to him in June. The IAEF (International Association of Engineering and Food) is awarded to highlight a lifetime contribution of a prominent engineer in the field of food.