‌Professor Da-Wen Sun has been elected Incoming President of the International Commission of Agricultural and Biosystems Engineering (CIGR). 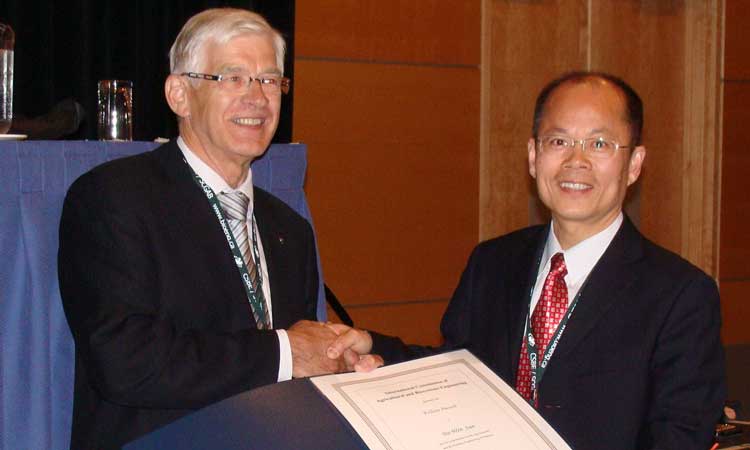 Founded in 1930, CIGR aims to serve the needs of humanity by fostering mutual understanding, improvement and rationalisation of sustainable biological production systems, while emphasising the protection of nature and the environment. CIGR gained special consultative status with the FAO in 1958, with UNESCO in 1966, with the Council of Europe in 1967, and with UNIDO in 2004.

During the CIGR World Congress in Quebec City, Canada on 13-17 June 2010, Professor Sun was also presented with the CIGR Fellow Award. The title of Fellow is the highest honour in CIGR, and is conferred to individuals who have made sustained, outstanding contributions world-wide, and that continue to improve the outcomes of the Agricultural and Biosystems Engineering profession.

Professor Da-Wen Sun, UCD School of Agriculture, Food Science and Veterinary Medicine, is a world leading authority in food engineering research and education.  He holds the Chair of Food and Biosystems Engineering at University College Dublin and is a member of the Royal Irish Academy. He has published over 200 peer-reviewed papers in high-impact international journals and has edited ten authoritative books. His scholarly works have become standard reference materials for research workers in the areas of computer vision, computational fluid dynamics modelling and vacuum cooling. He is editor-in-chief of the international journal Food and Bioprocess Technology published by Springer and editor of the book series Contemporary Food Engineering published by CRC Press / Taylor & Francis.