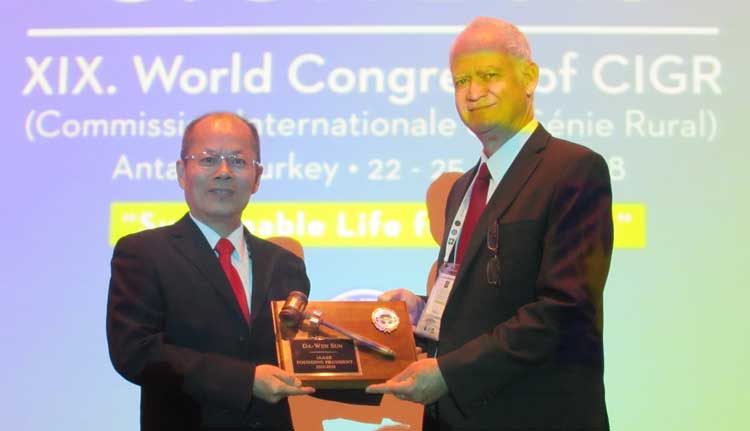 Professor Sun is a world authority in food engineering research and education. He has made exceptional contributions to the promotion and progression of global agricultural and biosystems engineering. Since joining UCD in 1995, he has served various key positions in the organisation including CIGR President 2013-2014, and was conferred with the lifelong title of CIGR Honorary President at the 4th International Conference on Agricultural Engineering held in 26 - 29 June 2016 at Aarhus University in Denmark.

Professor Sun has published more than 500 peer-reviewed journal papers (Web of Science h-index = 87, SCOPUS h-index = 91) with 39 papers being designated by ESI as highly cited papers, and many of his scholarly works have become standard reference materials for researchers in the areas of computer vision / hyperspectral imaging, computational fluid dynamics modelling, vacuum cooling, etc. He is the recipient of numerous awards and honours including election to the Royal Irish Academy in 2010, selection as a Member of Academia Europaea (The Academy of Europe) in 2011, award as a Fellow of International Academy of Food Science and Technology in 2012 and induction as a Foreign Member of Polish Academy of Sciences in 2017. Among many other international recognitions, Professor Sun was the recipient of the CIGR Fellow Award in 2010, the Freezing Research Award in 2013 from International Association for Food Protection (IAFP) and the IAEF Lifetime Achievement Award in 2015 from International Association of Engineering and Food (IAEF). He has also been honoured as one of the “Highly Cited Researchers” in the last 3 consecutive years (2015- 2017) by Clarivate Analytics (formerly Thomson Reuters). Most recently, Professor Sun has been presented with an Honorary Doctorate Degree from Peru. In addition, Professor Sun is the founder and Editor in Chief of Food and Bioprocess Technology, one of the top food science and technology journals in the world.