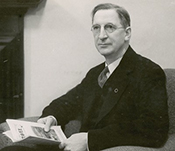 View a listing of the de Valera Collection pdf | 840 kb

A number of items were added to the collection posthumously.

De Valera was born in New York on the 14th of October, 1882, and at the age of two and a half years was brought to Ireland. He studied mathematics at the Royal University, and later became a mathematics teacher. In 1908 he joined the Gaelic League/Conradh na Gaeilge, where he would meet Sinéad Ní Fhlannagáin, whom he would marry in 1910. He joined the Irish Volunteers in 1913 and during the rebellion of 1916 commanded the 3rd Battalion at Boland's Mill. Though sentenced to death, his sentence was reprieved and commuted to penal servitude for life. De Valera became the only surviving commandant of the 1916 Rebellion. However, he was released on General Amnesty in 1917 and later that year was elected Sinn Féin M.P. for East Clare.

In 1926, De Valera founded Fianna Fáil following his resignation as President of Sinn Féin due to a split regarding the issue of abstentionism. He would remain elected as a parliamentary representative for Clare until his election as President in 1959.

He was President of the Executive Council of the Irish Free State and Minister for External Affairs from 1932-37. Following the enactment of the Constitution by the people, Eamon De Valera became Taoiseach and continued his position as Minister for External Affairs from 1937 – 48. He became Taoiseach again from 1951 – 54, and 1957 – 59. On June 25th, 1959, he was inaugurated as the third President of Ireland. He served as President from 1959 to 1973, consisting of two consecutive terms in office.

The collections can be consulted by the students and staff of UCD, and by external users, in the Special Collections Reading Room.