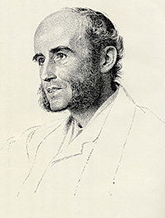 This is a collection of mid to late nineteenth-century books, mostly relating to English and religious history. Presently, there are around 150 books identified as having John Richard Green’s bookplate and we are currently working to locate additional books that may belong to this collection. The collection was donated by Alice Stopford Green in the 1920s.

John Richard Green (1837–1883), historian, grew up in Oxford, England, where he would later attend Jesus College. Immediately after his graduation, Green was commissioned to write a series of articles on Oxford in the eighteenth century, chiming with his interests in English and local history; however, rather than pursue a career as a historian at this stage in his life, he trained instead as a clergyman in the Anglican church. Following his ordination in 1861, Green spent several years working in poor parishes in East London, the workload and conditions aggravating a lifelong tubercular condition. Green was interested in scientific developments and called for reform within the church. Faced with intransigence from the institution, he resigned his living in 1869 and returned to history. His first significant publication was a Short History of the English People (1874) which was popular with general readers, if not with the emerging generation of academic historians.

In 1877, Green married Alice Stopford (1847–1929). She became an important figure in Green’s work, assisting with and supporting his historical writings, particularly as his health began to fail. Following her husband’s death in 1883, Stopford Green continued to establish her own reputation as a scholar and later, as an activist interested in African and Irish issues, working with Roger Casement (she would later campaign for his reprieve) and was involved in raising money to fund arms for the Irish Volunteers. After the 1916 Rising, Stopford Green moved from London to Dublin, and continued to be active in political and scholarly life. In 1922, she was nominated to the Senate of the Irish Free State, a role in which she served until her death in 1929.

The collections can be consulted by the students and staff of UCD, and by external users, in the Special Collections Reading Room.

Find material in the collection: