The UCD Civil Engineering staff Vs student football match was played last Thursday. The student team is shown in the picture above. Over the years this event as come to be regarded as one of the must-see events from the annual sporting calendar. As ever the media attention was intense in the week leading up to the match. Due to the intensity of preparation being undertaken by both sides in the lead up to the match this was one of the most eagerly anticipated for a number of years. The sense of anticipation in the Newstead building was palpable. Thoughts of projects, exams and mid-term were forgotten in the bustle of conversation about tactics, injuries and formations. Competition for a place in the starting line-up was intense. One participant commented that ‘it was like trying to get on to the Brazil team of 1970’. Due to the absence of acrimony in previous fixtures there wasn’t any sense of this being a grudge match. Instead the source of the anticipation stemmed from the prospect of two world class sides playing attractive attacking football.

Prior to kick off, both sides lined out with an orthodox 4-4-2 formation (staff team in the left picture). However thereafter there was a fluidity to the respective formations that was reminiscent of the ‘total football’ played by the Johan Cruyff-inspired Dutch team of the 70’s. Right from the kick off the tempo was frenetic. No quarter was asked or given – a loose touch or misplaced pass was immediately pounced on by the opposition, although overall the game was played in very sportsman-like manner. The staff opened the scoring through Hussein Aied, who finished clinically after some slick interplay between the staff midfield. However, undaunted, the students kept their composure and after a period of sustained possession, fashioned an equaliser through Rob McGivern. The resulting student celebrations caused much puzzlement among staff – ‘is it a bird?’, ‘is it a bicycle?’, ‘do they know what they are trying to do?’

The students kept up the pressure and were rewarded on the stroke of half time when Ciaran ‘Kid’ Lyng put them into the lead with a well taken header. After a rousing team talk from Dr Richardson and Professor OBrien the staff emerged with a renewed sense of purpose. Their increased composure was exemplified by Prof OBrien early in the second half when he perfectly controlled a long ball from defence and laid a beautifully weighted pass to a team mate. The staff did not have to wait long to regain parity, after being played through by Hussein Aied was taken down in the box and referee George Cosgrave had no hesitation in awarding the penalty, which Hussein coolly converted himself. In common with many great teams though, the students reacted well to adversity. The technical quality of their side was evident in the period after the staff’s equaliser, they kept the ball and fashioned a number of opportunities. The goal that put the students back in the lead was a thing of beauty, just as Maradona’s second goal against England in the ‘86 world cup has lived long in the memory, I think in many years to come football fans will still celebrate in Conor Moloney’s goal. At the time it looked like Moloney’s goal was going to seal the win for the students. However, as befitting such a glorious sporting theatre, one last piece of drama remained. Deep into injury time (and I mean Titanic deep!) Austin Devin broke down the left wing and squared a deliciously inviting ball into the students penalty area and inevitably that poacher extraordinaire and staff captain David Igoe was on hand to steer the ball into the unguarded net and send the staff supporters on the terraces into delirium. 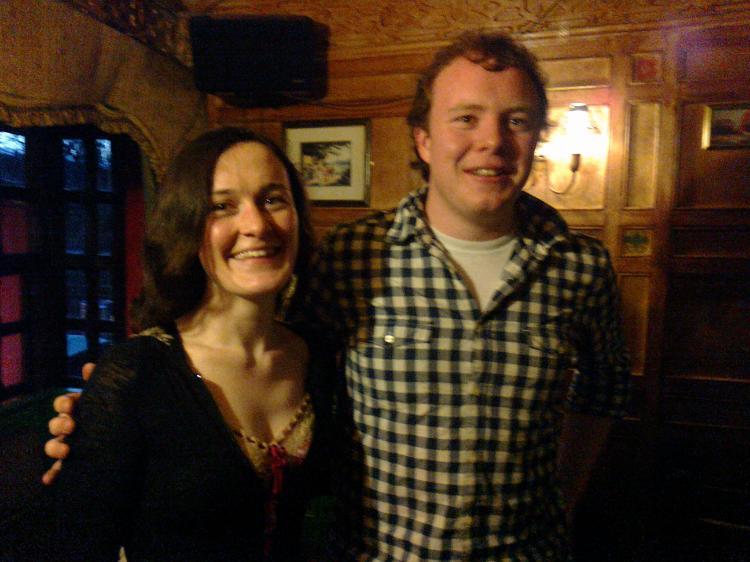 The penalty shoot-out that followed mirrored the quality that was on show during normal time. These great sides displayed none of the inhibitions that have marred many shoot outs in the past. The takers on both sides bravely stepped forward and addressed their kicks with the courage befitting champions. A gargantuan struggle culminated in a Gibbons-on-Gibbons clash. Staff-member Gibbons (left in the picture) won the day with student-Gibbons (right in the picture) diving the wrong way. Most would agree that staff-member Niamh was a deserving man/woman of the match (closely beating referee George!).

The purists may argue that the game was diminished by the fact that it occasionally strayed from the traditional orthodoxy of 11 v 11. However, to focus on such minutia is to do a disservice to the spectacle both sides provided. Frankly like all great shows this one left the spectator wanting more. One deliriously confused spectator was reported to be heard screaming ‘one more tune’! The quality of the fare on show and the excitement of the occasion only reinforce the reputation of the event – roll on 2013.