The selection of beer these days is astonishing, but recently I was faced with a new choice: the same beer in either a bottle or a can. I wondered about the energy cost of transporting a bulky product like beer across the globe, and what contribution the beer’s packaging made to this cost? And then there is the question of how much energy it takes to manufacture this packaging in the first place? And then the further question of happens to this packaging after the beer has been consumed?

These and other questions prompted a recent UCD study into the energy cost of household recycling. Masters student, Kevin Brennan, under my own supervision, set out to analyse what happens to a typical household Mixed Dry Recycling (MDR) ‘green’ bin, in particular looking at the energy cost of processing this waste. There is a glib assumption that once something has been put into the green bin it has been ‘recycled’, but the reality is far more complicated.

The RPS and the EPA reported on the total amount of waste produced and managed in Ireland in the year 2018 and, on average, an Irish family placed over 250 kilograms of waste into mixed dry recycling (MDR) bins that year. Assuming that bins are collected roughly every fortnight, it may be assumed that the contents of the average Irish recycling bin weighs about 15 kilograms, and this figure was used as a standard throughout the study. The breakdown of waste in a typical MDR bin is summarised in Figure 1, below.

Figure 1 – Breakdown of waste in an MDR ‘green’ bin, with the four largest components indicated on the pie-chart on the left.

So what is the cost of recycling this waste? The difficulty in answering this question is that ‘cost’ can be viewed in very different ways. For example, you could look at the monetary cost of getting a contractor to legally recycle and dispose of the constituents of the bin. Alternatively, given that monetary cost is transient and essentially based on what society deems valuable at the time (through taxes and incentives), the more fundamental energy cost of dealing with the waste could be assessed. Another options, given that items such as plastics do not biodegrade, you could try and look at the long-term environmental cost.

These three costs are obviously intertwined. For example, in an effort to reduce the environmental impact you might reprocess plastic at a high energy and monetary cost. Or you could put levies on the production of virgin plastic and thus shift the emphasis onto energy-intensive recycling. Given that environmental cost is so difficult to quantify, and monetary cost transient, the focus in this study was on the energy cost of recycling. 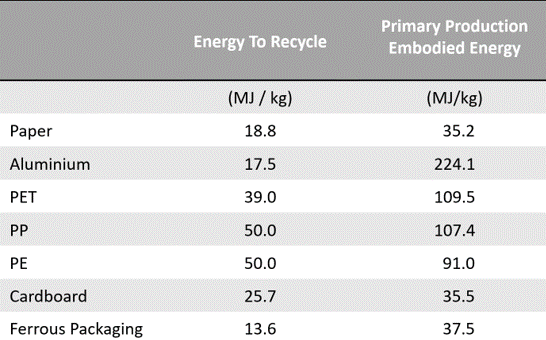 The above table shows the energy to produce (right column) and recycle (left column) different materials found in MDR bins. PET, PP and PE represent the three main types of plastic, which are mostly used for food and beverage packaging. These figures were combined with representative transport costs to get the total energy costs. They were also adjusted to account for the volume of food/drink packaged rather than just their mass. For example, if you were comparing the quantity of energy to recycle a fizzy drinks container – PET vs aluminium – you would compare, not the mass of that material found in the bin, but the energy cost per volume of fluid packaged. Some materials are denser than others, and some, such as aluminium, can form strong containers with thin walls, so normalisation on these grounds had to be carried out.

Figure 2 – The energy to recycle a single MDR bin could power a car from Dublin to Cork.

Although it was a challenge to get relevant information from recycling companies and track the circuitous recycling routes that items take, an estimate of the energy to recycle an MDR bin was found to be 293 MJ per bin. To put this into context, this is the same energy consumed in driving a car from Dublin to Cork. It is also important to point out that this figure is based on a complete recycling of the entire waste in the bin. It should be noted that in practice, due to the prohibitive monetary cost of recycling certain materials and the contamination of others, full recycling of MDR bin contents does not take place, but the figure is still informative.

There was a particular focus on plastic waste. The use of plastics for trivial, short-life-span activities have made them a growing societal concern. Plastic makes up around 20% of a typical MDR bin but not all of this is recycled. Contamination is a major issue that renders many batches unusable, but even for clean, suitable plastics, processes such as hydrolysis – which chemically break the plastic down its core components before rebuilding it to the previous product – only produce a new bottle for every two recycled.

Further to this, the monetary cost of this process, without subsidy, makes it uncompetitive against the production of virgin plastic. This points to a wider problem; from an environmental perspective, energy is priced low. The low cost of producing and shipping virgin plastic, as well as the low cost of the fossil fuels that these plastics are made from in the first place, incentivises the production of ever more plastic over recycling what we already have or seeking a sustainable alternative. And there is one further issue: aesthetics. Consumers ‘prefer’ the look of virgin plastic to the recycled alternative, even though the latter performs every bit as well.

In practice, most recycling facilities break plastics down mechanically into flakes. These flakes are then used to make duvets, boxes, pallets, jumpers and other similar products. The downside of this is that secondary plastic does not replace primary production meaning there is still a high use of natural resources and a heavy environmental impact. It does, however, reduce the amount of plastic going straight to landfill.

Aluminium is a uniquely recyclable product as it can be reused indefinitely with no sacrifice of quantity or quality. Interestingly about three quarters of all aluminium ever produced is still in circulation. As shown in table 1, the embodied energy of aluminium is high (over twice that of most plastics) due the high energy required to remove the metal from its ore in the first place, but the ‘energy to recycle’ is less than 10% of this original energy cost. 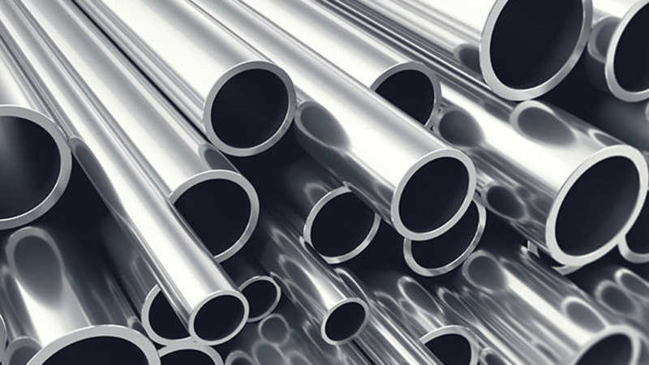 Aluminium is a uniquely recyclable material

Aluminium is used for many applications but in MDR bins it is primarily used as a container for drinks. And this brings us nicely back to question posed at the start; which is a better: bottles or cans? Fortunately for beer lovers, due to modern canning processes, there is no compromise to taste or freshness. In other words, ‘tinnies’ no longer taste ‘tinny’. But what of the energy cost?

Currently about one third of aluminium is recycled with the rest coming from virgin stock, so an average drinks can weighing 15g requires 2.3 MJ to be produced. The energy-per-mass cost of glass is around a fifth of that for aluminium, but the weight of glass in a bottle vastly exceeds that of an aluminium can, resulting in a energy cost per bottle of 7MJ.

But what about transport? Beer is shipped from every corner of the world and the two beers I was looking at were from Colorado. The transport costs of the container alone from the US works out at 1.4MJ for the can and a staggering 18MJ for the bottle. So the total energy cost of getting those containers on the shelf in Dublin was 3.7MJ for the can and 25MJ for the bottle, a huge difference. Given that the cost of the beer is the same in each case, it is clear that aluminium cans are a better and less wasteful option than glass bottles. They are also completely recyclable so no landfill is required.

However, broader questions on green waste recycling are not so easy to answer. In truth, the word ‘recycle’ means very different things for paper, plastic and aluminium, and the interconnected nature of monetary cost, energy cost and environmental cost are not well understood by the general public. Then there is the completely non-linear issue of ‘contamination’, to which Brennan adds yet another complicating point.

“The narrative I came across a lot, and is something that people need to hear, is that if you are not sure whether something is recyclable, just throw it away. We have this notion that stuff in black bins is bad and in green bins is good, which is absurd given that you incur an energy cost of processing materials for recycling but and if they don't get recycled into usable stock, that energy is wasted.”

It is obvious that we need to better understand and better communicate these ideas if we are to ‘recycle’ conscientiously as most people genuinely wish to do.