A team from University College Dublin took the top prize at this year's Engineering for People Design Challenge.

The competition, by Engineers Without Borders UK, saw UCD 1st year engineering students Clodagh Parkinson, Jennifer Carroll, and Shane Morrisroe claim the coveted number one slot for their submission which looked to solve the lack of internet access in urban communities in South Africa. 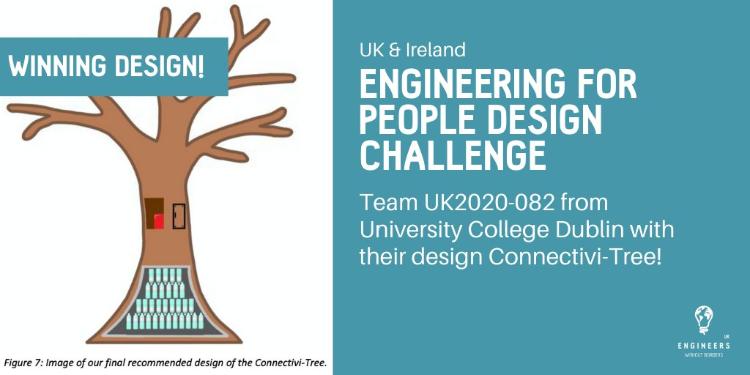 This year the Engineering for People Design Challenge focused on Makers Valley, a neighbourhood in Johannesburg, and students were tasked with creating opportunities to improve the lives of those who live there.

As a result of rapid population growth and economic inequality, the area is facing housing shortages, inconsistent access to electricity and water and problems with waste collection.

For their submission, the UCD team addressed the lack of internet access in Makers Valley. They created the Connectivi-Tree – a mesh WiFi network system with each router housed in an installation made by local artists and micro-enterprises.

Beating a total of 28 university teams from across the UK and Ireland, the UCD team each received an educational bursary worth £2,000.

The judges were really impressed with the winning UCD team’s submission, Connectivi-Tree.  In their feedback to the team they said:

“You really built on the ethos and strength of Maker’s Valley and the local community and it was really clear that you’d put the local artists, artisans and makers at the heart of your design.  The project’s aims are noble, in aiming to help regenerate the community, and allow people to take ownership of their space. We hope that you take the importance of building on a community’s existing strengths further in your future work.

The attention to detail was also visible throughout your process, thinking about where the connectivi-trees would be located for maximum social benefit, thinking about climatic conditions and how you could mitigate the effects of heat and rain, and considering other issues such as security and building a sense of place.

Overall, the judges were impressed with the evidence of your reflection throughout

the project and your attention to detail. When compared to other entries your idea

performed better in terms of demonstrating a holistic approach. You should feel

proud of what you have achieved and learnt.”

Engineers Without Borders (EWB) is an international development organisation that uses engineering skills to aid communities in developing countries.  EWB-UK has been running the Engineering for People Design Challenge for first and second year undergraduate students since the 2011/12 academic session.  UCD joined the Challenge in 2012/13, and the Challenge has been a core project as part of UCD’s first year Creativity in Design module, since that time.  The EWB-UK  2011/12 Challenge engaged 2,000 students in the UK, while in its most recent iteration it engaged 8,000 students from 38 universities in 8 countries across 4 continents.  This year student teams in South Africa, the UK, Ireland and the USA participated in the Challenge.

The Challenge provides an opportunity for students to work in teams to understand the lives, skills, resources, culture, and needs of a community they are unfamiliar with, and to explore designs which will benefit the community

This year, the Challenge was set in Makers Valley, in an area of Johannesburg in South Africa.  This is an area that has seen significant population growth, resulting in shortages in housing, food, and difficulty in accessing water and power.  In Makers Valley the population has been working to create change.  They recognise the opportunities for enhancement, and they worked with EWB to develop the design brief for the Challenge.

The design brief is defined across eight areas:

Through the design challenge students develop their understanding of sustainable development, inequality and the role and responsibilities of the engineer in the global framework.  Students more keenly understand the social, economic and ethical issues which will impact on their solutions.  They develop their engineering judgement, and the ability to use appropriate resources effectively.

From the group of 313 first year students undertaking the Challenge in UCD, five teams were chosen to represent the University for consideration for the EWB-UK Finals in June 2020.  Two of these UCD teams were subsequently chosen by the EWB Expert Judges panels, amongst the top 37 teams, to attend the online finals.

The design solutions submitted by the two UCD teams who were selected to attend the Grand Finals 2020, were:

At the Grand Finals, the top six teams were announced, and following a discussion with a member from each team about their team’s experience of the Design Challenge, the winners were announced.