Former US Ambassador to the UN, Professor Samantha Power, and Professor Cass Sunstein, the renowned US legal scholar have been awarded Ulysses Medals by University College Dublin. The medal is the highest honour the university can award. The Harvard academics were presented with the Ulysses Medals by Professor Mark Rogers, UCD's Registrar, Deputy President and Vice President for Academic Affairs. The official citation for Ambassador Power was read by Professor Orla Feely, Vice-President for Research, Impact and Innovation at UCD. 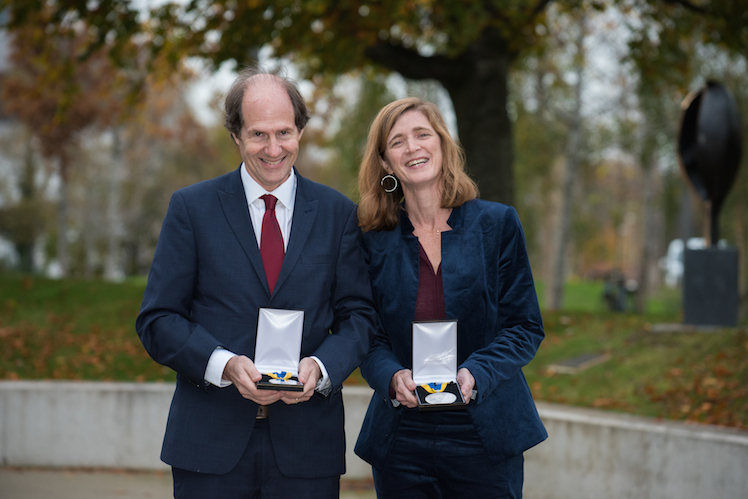 Professor Power has made a lasting contribution to human rights and international affairs as a war correspondent, Pulitzer Prize-winning author, human rights scholar, adviser to former US President Barrack Obama and UN ambassador. In 2013, President Obama appointed Power as US Ambassador to the United Nations, a position she held until the end of his presidency in early 2017. The former diplomat has been named one of TIME magazine’s “100 Most Influential People” and one of Foreign Policy magazine’s “Top 100 Global Thinkers”. She is currently the Anna Lindh Professor of the Practice of Global Leadership and Public Policy at Harvard Kennedy School and Professor of Practice at Harvard Law School.

The official citation for Professor Sunstein’s award was read by Professor Colin Scott, College Principal, UCD College of Social Sciences and Law and Vice-President for Equality, Diversity and Inclusion. Professor Sunstein is the most cited legal scholar in the United States. He worked for the Obama administration, as head of the Office of Information and Regulatory Affairs (OIRA). In this role, Professor Sunstein was responsible for overseeing his office’s cost-benefit analysis reviews of all regulations passed by the agencies of US government departments. Sunstein’s academic and teaching interests originated with constitutional law and rights and also include administrative law, welfare law, environmental law and jurisprudence. He has also been at the forefront of behavioural economics and behavioural law and economics. Professor Sunstein is currently Robert Walmsley University Professor at Harvard.

You can also view a shorter version where Samantha gives her advice for young people in University.