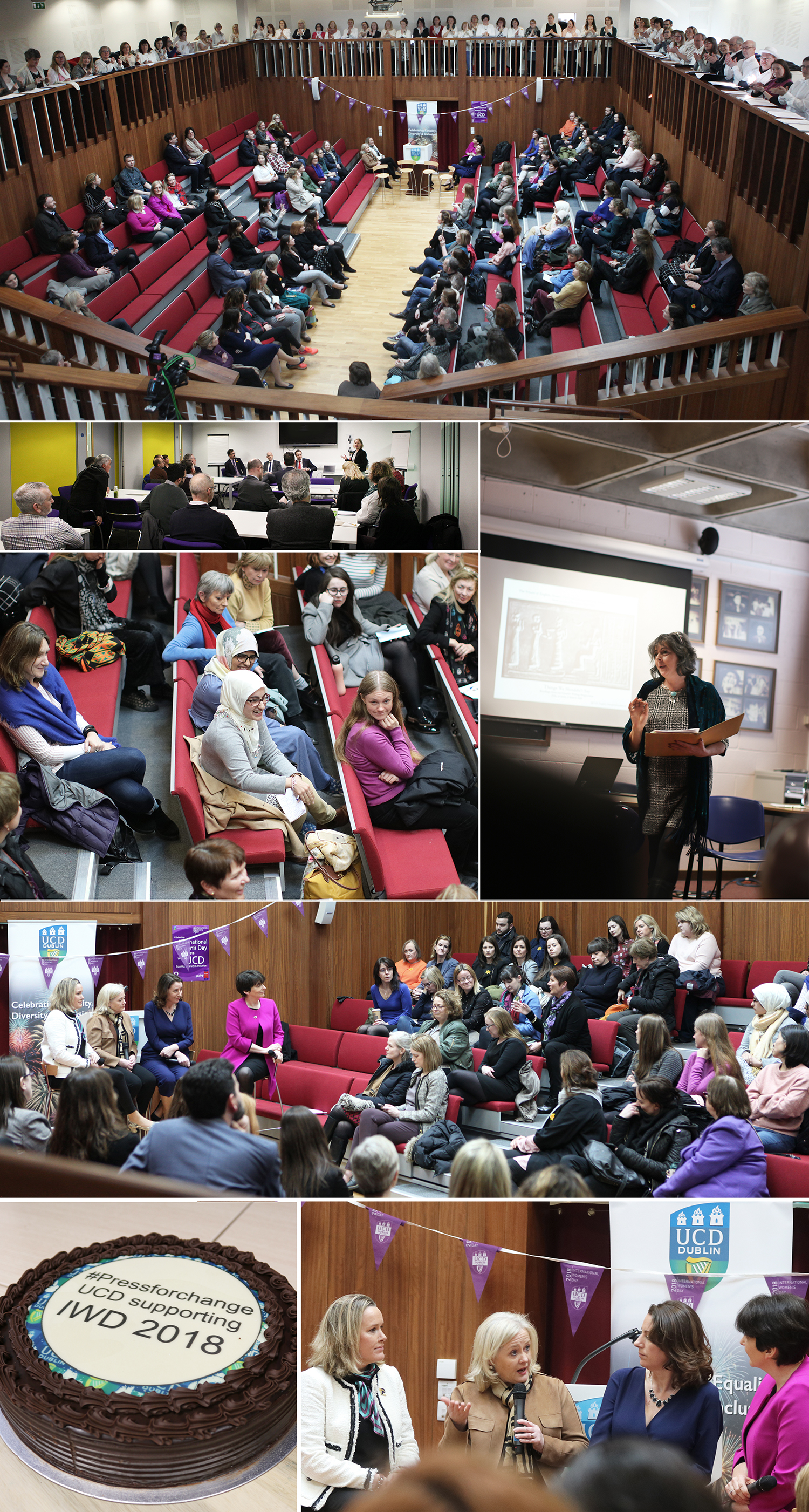 Scroll down to see original event line up and guest details

Scroll down to find information on coffee mornings, talks & seminars, workshops and more. Check out the details below and make your booking today.

To celebrate International Women’s Day, UCD Equality, Diversity & Inclusion is hosting a fireside chat with a panel of national journalists and academic leaders. Join us to hear how women are shaping the media landscape, navigating the challenges of the industry, promoting their own expertise and advocating for gender equality.

To complement this event, UCD will hold a workshop in the afternoon led by Women on Air to support women at UCD learn how they can best engage with the media and share their professional expertise and research.

UCD was awarded an Athena SWAN institutional award for progressing careers for women and gender inclusion in 2017. UCD is now supporting eight Schools in 2018 to apply for an Athena SWAN award while also implementing its university gender equality action plan 2017-2020.

The UCD Community Choir will perform at the start of the event, so please arrive for 1.00pm sharp.

Book your place at Women in the Media

Looking to attend the fireside chat? Book your place now on Eventbrite

Emmeline Hill is Associate Professor of Equine Science at UCD and was the co-founder of Equinome Ltd. (acquired by Plusvital 2015), a UCD spin-out company founded in 2009. She leads a Science Foundation Ireland funded research programme in equine exercise genomics, the largest of its kind in the world.

Professor Hill is also Chief Science Officer for the equine science company Plusvital Ltd, a world leader in the development and provision of genetic tests for the international Thoroughbred horse racing and breeding industries. She has been at the forefront of Thoroughbred performance genomics during the last decade and has published more scientific papers on equine exercise genomics than any other researcher worldwide.

Emmeline has engaged extensively with the media in recent years to connect with stakeholders in the industry and make her research accessible. As well as contributions to TV, radio and print media, in 2013 she co-produced the short film Bloodline – The Search for Speed, which showcased her SFI-funded research at UCD.

Katie Hannon is Prime Time’s Political Correspondent, having previously been Political Correspondent of the Evening Herald and the Irish Examiner and Political Editor of the Irish Mail on Sunday. She is the author of ‘The Naked Politician’, an account of the reality of life in the trenches of Irish politics, published in 2004. Since joining Prime Time as a reporter in 2004 she has covered a wide variety of issues including major investigations into banking, failures in child protection, vaccine trials in children’s homes and the Garda whistleblower controversies. She has won the Irish Goods Council Young Journalist of the Year, the John Healy National Print Award as well as the ‘Story of the Year’ in the 2012 GSK Medical Media Awards and 2017 Justice Media Award for television news.

Is a News Editor with RTÉ in Dublin. She’s been in Broadcasting as a presenter and IFTA nominated documentary maker with the BBC and RTÉ. She knows broadcasting from many angles. She is also a linguist and a former academic. Róisín is the Chair of Women on Air. She is passionate about getting more women’s voices on the airwaves. It is her belief that discussions feed into the national debate and form the first stage in the making of public policy. She has been instrumental in setting up Women On Air’s new media training programme which has facilitated an increasing number of significant female voices on the national and local airwaves.

(Unless otherwise stated, events commence at 11am)

Talks & Seminars on other dates

This workshop, hosted by Professor Colin Scott (VP for EDI) and Marcellina Fogarty (EDI Manager) will involve the sharing of experiences and initiatives from Barry Temple, Director of Services Sales for Western Europe, Dell and Jonathan Rutherford, Head of Enterprise Marketing at Vodafone Ireland, both of whom attended the “Men Advocating Real Change” programme. This will be followed by some thought provoking activities and discussions in the area of gender equality and provides a great opportunity for men to engage with this topic and to help drive cultural change. The focus of this workshop is towards males but all employees are welcome to attend this event.

Women on Air- Bringing Your Expertise to the Media

Join Women on Air for a workshop focused on developing your media skills and profiling your professional or academic expertise.

Women on Air is a community of like-minded women and men from the media who want to hear and see more women on the airwaves. Women on Air's events and conference provide female area experts with media contacts, practical broadcasting tips, inside information and personal contacts. Through the seminars and meetings women come to understand that their opinions are valid – and wanted – by radio researchers and producers. They also form networks of women who encourage and support them to get on radio or TV.

Learn from leading women in the media about how to prepare for interviews and showcase your expertise. This workshop is streamlined towards women but is open to all UCD employees.