Given the focus on culture and cultural texts in many of our Schools, much of the teaching and learning that takes place in our College has an inter- or transcultural aspect, reflecting a diverse array of perspectives and dealing with the question of how we negotiate difference. In the School of Art History and Cultural Policy, a number of modules across the School are global in nature, incorporating diverse viewpoints, including ‘Modern Architectures’ and ‘The Courts and Court Culture’ (both coordinated by Kathleen James-Chakraborty), and ‘Cultural Policy 1: Comparative Issues’ (coordinated by Victoria Durrer), ‘Business 1 (Management)’ (coordinated by Annette Clancy) and more.

In the School of English, Drama and Film, Jorie Lagerwey’s module design at first, second and third year focuses on identifying and analysing representations of race, class, and gender in 20th century and contemporary pop media.

In the School of Classics, a new module ‘Classics in Popular Culture’ (coordinated by Martin Brady) has been developed, one of whose learning objectives is ‘to analyse the ways in which contemporary biases, political or otherwise, have shaped the ways in which contemporary artists have appropriated material from the ancient Greek and Roman worlds’. In practice this involves exploring the ways in which Classics has been (ab)used by historically privileged communities, and how we can take some steps towards decolonization by exploring Classics’ use in ‘popular’ (which is generally understood to mean ‘non-elite’) culture.

In the School of English, Drama and Film, Gerardine Meaney is the PI on the ERC-funded project ‘European Migrants in the British Imagination: Victorian and Neo-Victorian Culture’, which addresses long-term attitudes to migrants as well as tracing the contribution of migrants to literature in a transhistorical framework. The project has a specific focus on gender and the cultural production of women migrants in Victorian and neo-Victorian literature. Jorie Lagerwey’s research focuses on critical race studies and feminist media studies, as exemplified by her monograph Horrible White People: Gender, Genre, and Television's Precarious Whiteness (2020).

In Music, Anika Babel’s PhD project, ‘The Classical Prerogative and Western Art Music: Representing the Piano in Dominant Film’ (supervised by Laura Anderson) investigates piano tropes in contemporary mainstream film to elucidate (1) how Western art music is constructed in the popular imagination and (2) to scrutinise the intersectional issues of class, gender, and race that are perpetuated on-screen. It finds that Western art music is portrayed from the perspective of the white racial frame as a white possession, stemming from hierarchical class structures and archaic Victorian attitudes. This work questions the (re)mediatory relationship between the ‘reel’ on-screen world and the ‘real’ lived world, given that the everyday impressions of Western art music may be significantly informed by cinematic encounters rather than concert hall experiences. This work brings matters that are ‘unspeakable’—meaning problems that are not discussed—to the fore so that equality, diversity, decolonisation, and inclusivity are central considerations for future endeavours relating to the practice, research, and teaching of Western art music both in and beyond the academy.

Victoria Durrer (SAHCP) is co-founder of Brokering Intercultural Exchange, an international network for those researching, teaching, and practicing arts and cultural management. Members host seminars, reading groups, and conferences to build understanding of the role of arts and cultural managers as intercultural brokers in our context of globalisation, internationalisation and global migration. Together with Raphaela Henze (Heilbronn University), Victoria Durrer co-edited and published work from the network through Palgrave MacMillan’s ‘Sociology of the Arts’ series. With a focus on the fine, visual and performing arts, Managing Culture: Reflecting on Exchange in Global Times positions arts and cultural management educators and practitioners as active agents whose decisions, actions and interactions represent how we, as a society, approach, relate to, and understand ourselves and others. The book provides new insights into how arts and cultural management education and practice are socialisation processes with global, political and social implications, particularly in the ways in which we work and experience cultural diversity, (in)equality and inclusion within and between nations.

In the School of English, Drama and Film, a wide-ranging student survey was run, commissioned by the HoS (John Brannigan), in order to gain a broader understanding of the EDI issues facing an increasingly diverse student body. The survey was designed, moderated and reviewed by Deirdre Flynn, with assistance from Maria Stuart (director of EDI in the School). The results allowed for a more detailed understanding of how students understand EDI and what they consider to be the main issues. A summary of the findings can be read in Appendix 2. Also in this School, in July 2019 Anne Mullhall, as Director of Centre for Gender, Feminisms & Sexualities (CGFS – for more information, see below), supported and co-organised an important public event entitled ‘Are We Doing Diversity Justice? Challenging Homogeneity in Irish Literary Spaces’, with readings & discussion by emerging writers.

In the School of Irish, Celtic Studies and Folklore a new Irish language rap, ‘Seo Mo Spás’ [This Is My Space] by Eoin McEvoy, celebrates the diversity within the Irish-speaking community. The track, which went viral on Twitter when released in November 2020 and has had over 40,000 views and is available to watch on YouTube, came joint first in a spoken word competition run by poet and UCD alumna Ciara Ní É for her bilingual poetry night REIC. Set to a backing track by the famous rapper Doja Cat, the rap begins with a sharp rebuke of the ill-informed commentators who criticise the Irish language and its living community without learning the first thing about them, before moving on to praise the successes of the Irish language community in recent times. The rap showcases Gaeltacht natives and urban neo-native speakers, queer and straight artists, sports teams and LGBTQ+ conversation circles, iconic radio presenters and social media influencers, Traveller and settled musicians, community activists, drag queens and music festival organisers – all of them Irish speakers of every age.

The chorus proclaims, on behalf of all of these people, ‘Seo Mo Spás’ – this is my space. The Irish language space is an open space. Membership of the community depends on one factor only: a person’s willingness to learn and use Irish. This too is the root of the community’s diversity. People of all colours, religions, backgrounds, sexual orientations from all over the world and with a very wide range of interests are all valued members of the community. The second verse ends with a reflection on this: ‘Tá mé beo i mbéal an phobail, geal, riabhach is dubh.’ [I am alive in the mouth of the community in all its shades.] 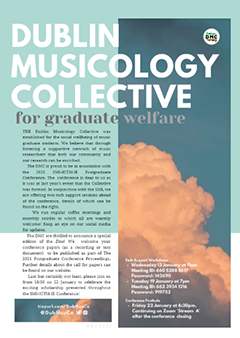 In the School of Music, The Dublin Musicology Collective (DMC) was established in January 2020 to encourage inter-institutional links between graduate students to support both our research and social wellbeing. The DMC promotes inclusivity and diversity through its events, which include regular coffee mornings, workshops, and evening socials on Zoom. These events see students and post-doctoral fellows tuning in from the US, UK, and across Europe. The collective is run by seven PhD students from UCD, TCD, DCU, RIAM, MU, and TU Dublin. Equal power distribution is central to their policy and the deliberation of decisions is made as a collective.

The function of the presidential role, which is currently held by Anika Babel (UCD), is distinguished only by gentle leadership expectations: to motivate and support the aspirations of the collective. The DMC is proud have fostered a safe space for diverse scholars and scholarship to meet and is delighted to provide an open-access platform, The DMC Zine, for the publication of graduate research. Further information can be gained here.

Invited by the College’s EDI Committee, representatives from IFUT Kelly Fitzgerald (School of Irish, Celtic Studies and Folklore) and Emma Sokell (School of Physics) gave an information session on contract law and the Cush Report in February 2020. Contracts are an EDI issue, and precarious employment within academia militates against initiatives to diversify faculty and make the higher education sector more equal and inclusive.