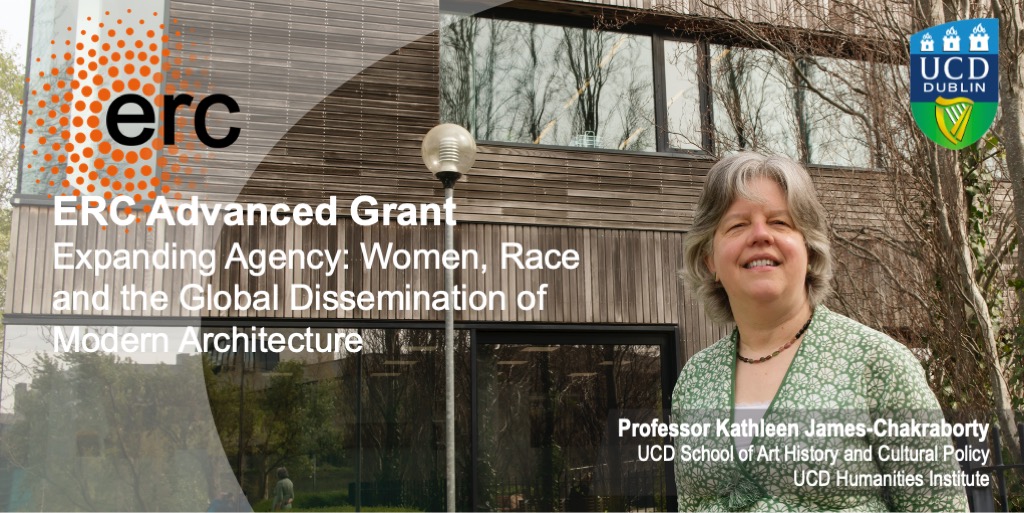 Professor Kathleen James-Chakraborty, UCD School of Art History and Cultural Policy and UCD Humanities Institute has been granted one of the EU’s most prestigious funding awards to provide insights into the role of women and ethnic minorities in the transmission of modern architecture.

The European Research Council (ERC) today announced the winners of its 2020 Advanced Grants competition, worth a total of €507 million in awards to 209 leading researchers across Europe – four of whom are based in Ireland.

Professor James-Chakraborty’s project ‘Expanding Agency: Women, Race and the Global Dissemination of Modern Architecture,’ will explore the role that women and members of ethnic minorities, primarily African-Americans, played in transmitting modern architecture and design internationally, including within Europe, between 1920 and 1970.

Strands devoted to patronage, journalism, entrepreneurship, and institution-building will offer alternatives to accounts that focus primarily on architects. This will expand our understanding of who had agency in this important story and more generally in the shaping of the built environment.

The research uses a global approach that stresses comparisons across continents, helping to build a more nuanced understanding of how architecture, interior decoration, landscape architecture and furnishing design are transformed by new ideas that emanate from a multiplicity of sources.

The overarching goal is to support a more diverse profession that, in the wake of social justice movements such as #MeToo and ‘Black Lives Matter,’ is better prepared to engage with a broad public and address such social challenges as the integration of migrants and sustainability.

“I am also very proud that the EU will be funding the study of the architecture of the campuses of historically black colleges and universities. It is only by having an equitable architecture profession that we can all inhabit an equitable built environment.”

Director of UCD Humanities Institute, Professor Anne Fuchs said: “Kathleen James-Chakraborty is a world-renowned architectural historian whose research on global modern architecture continues to inspire students, early career researchers and senior colleagues across many fields. As Principal Investigator of the UCD Humanities Institute-funded project ‘Modern Architecture and Culture in the Mid 20-Century: From Exporting to Importing the New,’ she mapped out a global research agenda, revolutionising the methodological frames through which we understand modern architecture.

“Her ERC project ‘Expanding Agency’ builds on this and explores how women and people from diverse ethnic backgrounds – architects, journalists, entrepreneurs – have actively shaped modernist architecture and design around the world. With its focus on female agency, this research sets an innovative agenda for years to come.”

Head of UCD School of Art History and Cultural Policy, Associate Professor Emily Mark-Fitzgerald said: “This award not only recognises Professor Kathleen James-Chakraborty’s international excellence as a scholar, but promises to be a ground-breaking project adding critically important perspectives on gender, race, and ethnicity to the field of architectural history. We are delighted as a school to be the home for these exciting forms of enquiry, energising our academic community and students.”

Principal of UCD College of Arts and Humanities, Professor Sarah Prescott said: "Professor James-Chakraborty's exceptional award is of major global significance for Arts and Humanities research and is testament to her world-leading scholarship. The inclusion of postdoctoral and PhD scholars as an integral part of the grant also supports early career humanities researchers in her field and further enriches this pioneering and important project."

The grant of €2,082,906 over five years will cover the employment of two postdoctoral researchers and two PhD students.

Commenting following the announcement, ERC President Professor Jean Pierre Bourguignon said: “For this last ERC call under Horizon 2020, over 200 researchers will be funded to follow their scientific instinct and dreams. Still, the great increase in demand led to a very fierce competition – only 8% of candidates were successful.

“We look forward to seeing what major insights and breakthroughs will spring from this investment and trust. We are pleased with the continued positive trend for women researchers showing that ERC's sustained efforts on this matter pay off."

Half of the ERC Advanced Grants in Ireland were awarded to female scholars. The top award was also claimed by a woman at UCD last year, when Professor Gerardine Meaney won the grant for a study focused on migration and culture using new digital methodologies.