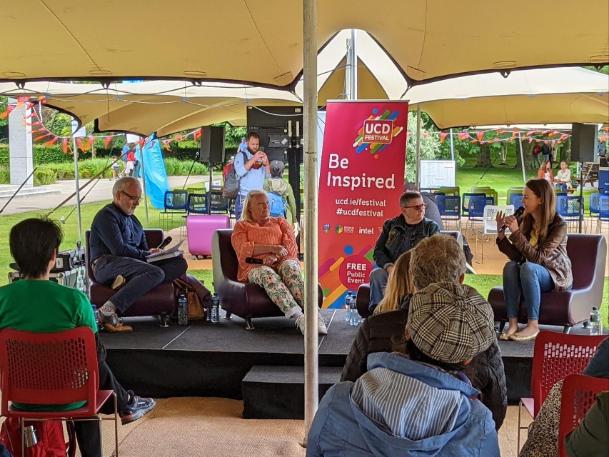 The College of Social Sciences & Law recently held a powerful panel discussion on the “Magdalene Laundries: Told, Acknowledged and Not Forgotten” at the 2022 UCD Festival on June 11.

Based on the book, “Ireland and the Magdalene Laundries: A Campaign for Justice”, authored by a number of UCD alumni and academics, this conversation examined how the Justice for Magdalenes campaign changed the mindset of Irish society and led to the Government’s announcement of a national site of research and remembrance. The discussion was facilitated by Colm O’Gorman, Executive Director of Amnesty International Ireland. The panel included UCD BCL alumna Dr Maeve O'Rourke, activist Mary Harney and Magdalene Laundry survivor Lyndsay Rehn.

Dr O’Rourke, Assistant Professor of Human Rights at the Irish Centre for Human Rights and School of Law, NUI Galway, who is also a co-author of the book, began by providing a realistic understanding of the historical background and explanation of how the book came about. Maeve explained,

“In 1993, Mary Rafertaigh found out that the nuns in High Park which was one of the 10 Magdalene Laundries. High Park in Drumcondra had sold some land and it turned out when Mary dug into this sale that they had managed to get a license for exhumation and cremation of 155 women without producing death certificates for the majority and without producing death certificates for the majority of them, without being able to name all of the women and that still remains to be the case today so the Justice for Campaign was in response to the fact that injustice is not historical. It was so clear then that it was ongoing and it’s so clear now that it is.

Mary and Lyndsay shared their personal experiences and also focused on where things are currently at for the Campaign and what they’re hoping will happen in the near future to acknowledge the survivors and educate the nation.

Mary who was born in Bessborough Mother and Baby Institution illegally fostered and later sent to an industrial school from the age of 5-16, is determined that future generations of Irish citizens shall know, through education and memorialization the truth about Ireland's institutions and to ensure they are never forgotten.

Lyndsay is a Magdalene survivor who spent time in An Grianan and worked in the laundry as a young girl. Accompanied by a number of other survivors, Lyndsay instigated the Judicial Review to have An Grianan included in the Magdalene Redress Scheme. She opened the door for others in similar centres across the country to be added to the scheme.

For anyone who would like to learn more about the Magdalene Laundries and the Campaign for Justices, make sure to visit the Justice for Magdalene Research website.

The book can be purchased from a number of places including Dubray, Easons, Amazon and Waterstones. For more information on the authors and/or the book, click here.